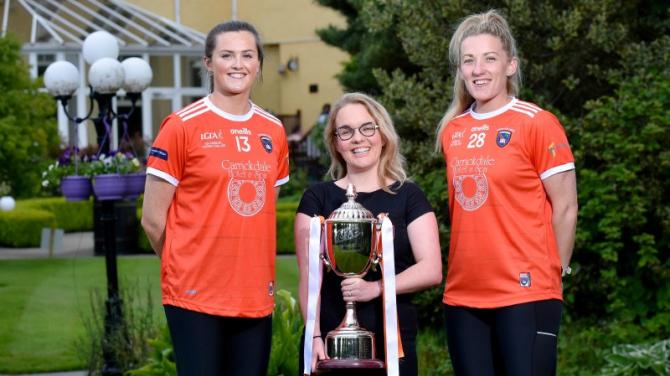 ARMAGH Ladies couldn't have asked for a tougher opponent from their opening round of the All-Ireland series. But the result and performance against Meath will be used as a yardstick as to how far this great Orchard team can go.

Meath dumped Armagh out of the championship last season with their high energy pressing game and it was no surprise they went on to win the All-Ireland.

It has been a phenomenal rise for the Royals who less than a year previous had won the Intermediate national title and then this year they clinched the Division One National League crown, after beating Donegal in the final. It is set up to be a cracker.

“We didn’t perform like we can and we were a bit shell-shocked by the ferocity of Meath’s game-plan last year. We know what to expect this year so it is a different dynamic and it doesn’t make it any easier, but at least we know what we will be facing.

“I think more than anything it is the standard of performance that I am looking for. We could play very well and Meath beat us by a point and at least we know that we are not far away. What I am looking for is a high quality performance from all over the field. When you get that then results look after themselves. At the end of the day, you look at the Ulster Final, Donegal played exceptionally well too, bar a couple of mistakes.”

Both teams have the never say die attitude engrained in their DNA. The Orchard girls pulled the Ulster Final win out of the fire, having been floored twice against Donegal they had the craft, ability and courage to win and the Armagh ladies boss his team can take plenty of confidence from their three in a row title wins.

“The good thing is that we have two group games, so that doubles are chances to qualify.”

Kelly Mallon is a magnificent leader. Having sat out most of last season through injury she has come back in stunning form and she should take huge confidence from her Ulster Final performance. She displayed nerves of steel to clip over the equalising free in the last seconds of normal time and the skill to fire home the winning goal.

Aimee Mackin produced a moment of magic and her mazy run and fantastic finish into the net gave Armagh the lifeline and inspiration they needed.

Meath will be tougher than Donegal, but the stakes are not as high. Armagh face Monaghan the following week and a win against them would be enough to see Armagh through to the next round, although that can't be taken for granted. If Armagh are going to get the chance lift more silverware this season, then there is a good chance they will face the Royals again, so perhaps not showing their strong hand could be on the agenda.

“You can’t just go for broke against Meath,” said Murphy.

“They can because they have already qualified by beating Monaghan. It is a good pitch and it should be a good game and a good challenge. These are the teams that we want to be playing, you learn nothing playing weaker teams.”

Good news for the Orchard is that Crossmaglen’s Alex Clarke may get some game-time after missing most of the season through injury and her return will be a massive boost.

“Alex is not that far away and I am delighted to say that, she has put in a lot of work.” said Murphy.

The top two teams go through to the next round with the loser exiting the competition. Should Armagh win one of their next two games, then they are likely to play either Galway or Kerry.

Armagh play Meath in Pearse Stadium in Longford on Sunday (June 19) at 3.45pm. Bring the colour.