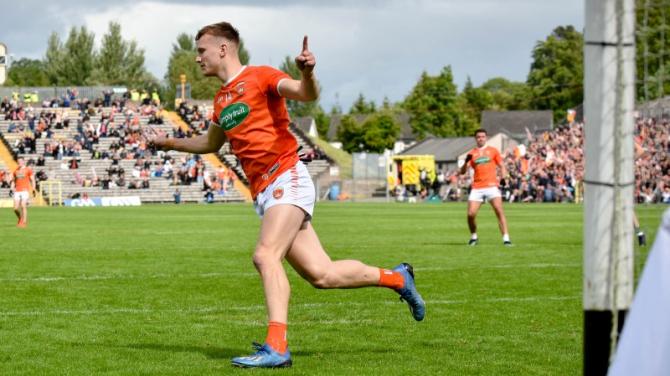 ARMAGH assistant manager Kieran Donaghy is confident that the Croke Park pitch will suit Armagh’s style when they face Galway in the All-Ireland quarter-final on Sunday, June 26, at 1.45pm in Croke Park.

And the Star has again made a rallying call to fans to turn Croke Park Orange and insists the support makes a huge difference to the team.

Armagh take on the Tribesmen after an emphatic ten-point victory over Donegal in Clones on Sunday. It was an impressive team performance and the Orchard supporters couldn’t be stopped from pouring onto the pitch after the final whistle.

It was sheer elation from the Armagh support as the streets, pubs and roads were jammed with Orchard fans in good spirits before the game and sheer giddiness long after the final whistle.

“We are going to Croke Park in two weeks and the Armagh fans are going to travel in crazy numbers, so it is a good day for the county,” said Donaghy.

“Croke Park will suit this team, Clones is a fine big pitch and we played well against Dublin earlier this year.

“A big pitch suits our kicking style. This is why these players train at the start of the year. It is to try and get to Croke Park and obviously you have a few chances, we had a National League final we didn’t make it and then you have the quarter-final of a championship and we are in there.”

Galway scored 2-16 from play when they defeated Roscommon in the Connacht final, having posted 4-20 against Leitrim after beating rivals Mayo 1-14 to 0-16 in the opening rounds. The Tribesmen will be back in Division One next season after finishing runners up in Division Two.

It will be a tough challenge for Armagh and both sides will be confident of beating each other, but momentum will be with the Orchard after back-to-back wins over Ulster rivals, Tyrone and Donegal.

“It is not an easy job to back up knocking out the All-Ireland champions,” Donaghy said.

“Our message was good and Kieran [McGeeney’s] message in the dressing room after last week was about ‘this is just a game and we have got a big game coming next week,’ and little did we know we would get the biggest draw we could get. We got the two toughest draws that we could in the last two rounds and our fellas have responded really well.

“We just need to push on and keep momentum going and this county is going to get behind this team.

“It is good that we get to have a proper training week or seven or ten days coming into this game because last week was a bit tricky because fellas were sore and hurt after the Tyrone game and we were resting guys. “I am delighted and looking forward to it.”

Tickets will be on sale nationwide and as well as allocations to local clubs as the Armagh supporters aim to turn Croke Park orange.

The game is followed by Mayo v Kerry at 4pm.