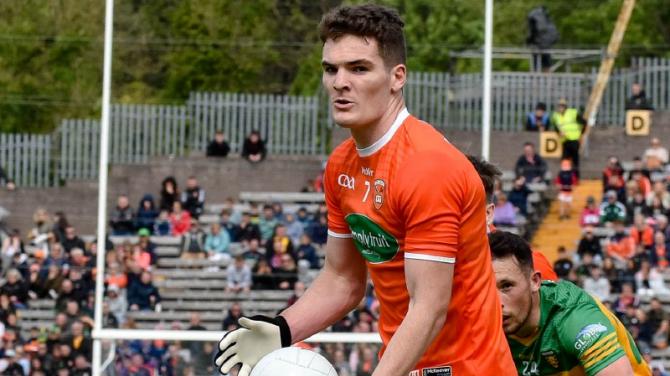 ARMAGH’S Jarly Og Burns put in a phenomenal display along with his team-mates in Sunday’s blitzing of Donegal.

It was over 40 minutes from the final whistle that the Silverbridge player eventually made his way to the tunnel in St Tiernach’s Park, Clones. He was swarmed with fans loaded with phones and markers to sign jersey’s and pose for selfies. The last time Armagh had such a win in Clones nobody had heard of a selfie and that is why young Burns was happy to deliver a such a performance in front of almost 17000 fans.

“Armagh fans have wanted a team to scream for and thankfully now we are giving them that and they deserve it,” said Burns.

“They are such loyal supporters no matter how bad we are going or good we are going they always have your back and it felt it was two to one Armagh fans and against Donegal. The crowd was unbelievable and I know Kieran Donaghy had asked for the Armagh supporters to come out in force today and by God they did.”

“This team have struggled to get back-to-back performances and that has been asked off us and we knuckle down today, we didn’t panic when we could have panicked and thankfully it is not even about the win, the performance is most important thing for us today,” Burns said.

“We needed that performance today to get one back-to-back today was big for us and thank God in the second half we cruised to victory.

“Donegal have had our number of the last few years and that is massive win today with this group and I am just delighted.”

It was a massive turnaround to from the defeat to the same opponents only seven weeks ago and the Armagh player said that a few hard truths were learned after that performance and they haven’t looked back since.

“It is hard to put your finger on it, it is cliché to say it was hard work but we didn’t work hard enough in Ballybofey,” Burns said.

“We looked ourselves in the mirror and no-one play up to what they could and we just knuckled down and got it right. We figured out a few things and it happened for us today and I’m just happy we got that.

“We kept going, and in other years we might have sat down and Donegal would have walked all over us and maybe finished it off but thankfully we have learned, we really have learned and I am just delighted that we showed character today and we got back and got the win. There was big pressure on us today to rectify, because that day in Ballybofey wasn’t good enough and it is a weight off our shoulders just to get that win and fly past Donegal.”

It has hard to mention the Clone pitch overrun with orange without thinking or talking about Jarly Ogs father Jarlath who captained Armagh to their Ulster breakthrough in 1999. The sense of occasion wasn’t lost on any of the players and while no trophies were being given out on Sunday, the injection of positivity and belief from another big win against one of Ulster’s Kingpins breed confidence that Armagh are building towards better times.

“Watching videos of that sort of brings back memories of the noughties when obviously Armagh were successful and you were shouting and cheering them on and we are just delighted to get another day in the championship,” Burns said.

“A good performance at home and at Clones and next Croke Park, that was our aim to get to Croke Park and to try and express ourselves again.

“We want to try and bottle that again, we bottled it after the last game and carried it into today, so hopefully we can do the same the next day.”