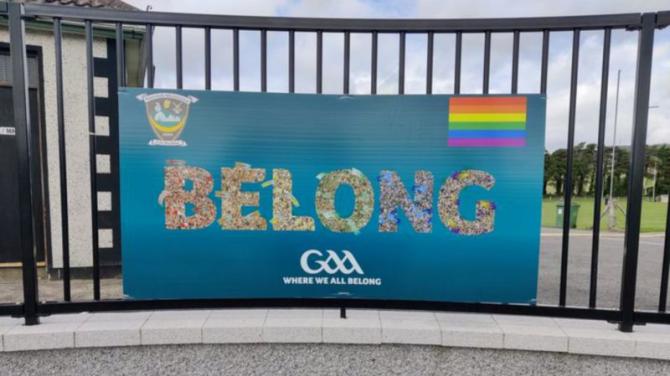 KILLEAVY GAC chairperson Maeve O’Neill said it is important that the south Armagh GAA club is safe and welcome place for members of gay and LGBTQ community.

It is international Pride month during June and Killeavy have displayed Pride signage at the entrance to the club and O’Neill says it is important that no-one is left behind.

“We have been doing things recently for International Women’s Day and when Aisling Murphy was killed, we had a walk of remembrance around here,” said O’Neill.

“We try to keep politics away from the club as much as possible but there are certain things, we feel like we should stand up and speak out and make sure people feel like this is a place for everyone.

“I am still a player and I know in my team over the years has lost girls that doesn’t feel comfortable coming out. At the time you may not have known then and only know now but didn’t feel comfortable around here. I am sure there are boys in the exact same position.

“So, any parents that have gay children that sign makes them feel a little better, that their children has a safe space and that is great.

“There is a place for everybody here and I don’t want anyone to turn away from our games for fear of changing rooms talk or that kind of stuff.

“It is such a small thing for us to do, it is just a sign but the amount of people that come in our gate, we have 32 teams, so thousands of people pass through here every week. The GAA manifesto is where we all belong so I think Pride plays a big part of that as well.”

Killeavy are not the only team to show support during Pride month but they are one of the first to include a sign at the gates of their club and the chairperson insists that her club intends on doing more.

“You see University of Limerick; they would have the whole collar in pride colours,” O’Neill said.

“I don’t know if we are the only club, I looked up on Facebook to see what other clubs are doing to mark the occasion and I have seen some clubs have gone as far as having a pride jersey and that is something that we are going to try and do next year.”