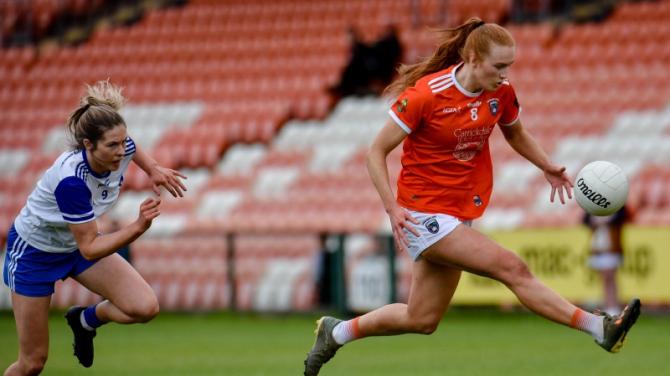 ARMAGH Ladies will face Kerry in the All-Ireland quarter-finals after comfortably seeing off Monaghan on Saturday.

The Orchard ladies, who were at the Athletic Grounds, put Monaghan to the sword in the first half and with their place in the last eight secure, took their foot off the gas for the entire second half.

It was job done by half time and with several squad members getting valuable game-time it means that the Orchard girls will get another crack at Kerry. It was the Kingdom who denied Armagh promotion to Division One this season and they are keen to banish the ghosts of that game completely.

The Orchard girls were ruthless in the first half, Aimee Mackin scored 0-4, while her sister Blaithin and Niamh Coleman (1-1) were the goal-scorers while captain Kelly Mallon contributed four frees.

Any win was going to be enough to take Armagh through to the knockout stages but, having drawn with Meath the previous Sunday, the orangewomen needed to better the 15-point winning margin the Royals had achieved against Monaghan in the opening group game.

Although Armagh had missed opportunities to claim what would have been a deserved victory over Meath, sharing the spoils at Longford’s Pearse Park meant control of Group B remained in Orchard hands, albeit Monaghan would be out to poop the party.

Having played exceptionally defensive football against Meath, the expectation was that Monaghan would camp inside their own 45 for the duration with the negative aim of thwarting Armagh ambitions to finish first in the group.

However, by registering the first two points of the match with the wind behind them, Monaghan scored double what they managed all afternoon against Meath in the opening minute on Saturday and it was all square coming towards the end of the first quarter.

But Armagh gradually got on top and goals by Blaithin Mackin and Niamh Coleman to go with four points apiece from skipper Kelly Mallon and triple All Star Aimee Mackin helped the hosts take a commanding 2-9 to 0-4 interval lead.

The other Orchard score came from Aoife Lennon, who had replaced injured namesake Aoife McCoy in one of two changes to the starting team from last day, with Harps skipper Fionnuala McKenna also coming in for Ballyhegan counterpart Eve Lavery.

With her Northern Ireland netball team in Glasgow warming-up for next month’s Commonwealth Games, it had been expected Caroline O’Hanlon would miss the Monaghan match so her availability was a boost for Armagh and seemed a statement of intent.

When O’Hanlon followed Niamh Marley and Coleman in raising a white flag in the second period, Armagh led by 14 points with nine minutes remaining and were well on course to achieve that important margin of 16, but they didn’t score again.

In addition to the originally listed McCoy and Lavery not featuring, Murphy replaced goalkeeper Anna Carr as one of three half-time substitutions, with Player of the Match against Meath last day, Lauren McConville, and Catherine Marley also withdrawn.

It was good to give back-up keeper Brianna Mathers meaningful game-time, fantastic for hard-working Harps prospect Megan McShane to get a good outing in the orange jersey and stalwart Sarah Marley undoubtedly deserved her first run in three matches.

The teams registered just three points between them in a thoroughly underwhelming second half and the 2-12 to 0-4 result means Meath progress as group winners with Armagh going through in runner-up place after failing to show much urgency in chasing the target.