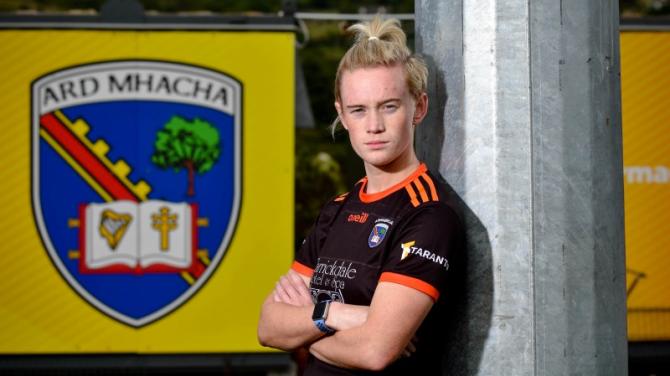 SHUANA Grey has been part of the Armagh team for the best part of ten years and she's ready to aim for the top.

The game takes place on Saturday (August 9) at O'Connor Park, Tullamore, Co Offaly, at 5pm, so it's a great chance to get the flags out.

The Dromintee no-nonsense defender will face one of Kerry's many marquee forwards when the two sides meet in the All-Ireland quarter-final and she's relishing the opportunity to play on the big stage again and she is hoping that the Armagh support will come out in numbers.

“I was at the men's game [Armagh v Galway] and it was unreal atmosphere, I wasn't playing and it felt fantastic,” said Grey.

“It would be lovely for the ladies to get a similar reception. It does give you such a boost seeing the crowds.”

Grey took a few breaks from the Armagh camp over the past ten years, including playing football in New York.

A front line worker during the pandemic, she put in the relentless hours as a Pharmacy technician, where it was work, home, work, at a time many of us were getting cocktails delivered from a boot of a car.

“I worked all the way through Covid, I didn't get a break. It was tough at time, it was constant, you couldn't meet up with anybody, you had no outlet, you just went home and went to work.,” said Grey.

“And if you were doing runs you had to do them on your own, whereas if you were meeting up with girls they would push you on. That was hard, having anyone run with me or push me on and then go to work the next day.

“The restrictions were you could only go ten kilometres from your house, so the only place I could go was football [when season started] and work, so it was so good to have an outlet like football to go to and to see everyone.”

Football was the release and Grey has been pivotal to helping the Orchard women win three Ulster titles in a row.

Kerry denied Armagh promotion to Division One after winning the Division Two title when the two sides clashed earlier this season. It was a bitter blow to the Orchard camp. They know they need to be playing Division One football regularly to become the super team they are capable off, but they also learned from Meath last season that you can win All-Ireland's from Division Two.

The manner of defeat hurt. Armagh were off. They gave possession away cheaply and when Kerry took the lead they tried to force the issue and fell short. There is no doubt the Armagh team has learned from that defeat and thrilled to get another crack at Kerry.

Grey accepts that Kerry are capable of spoiling Armagh's party for the second time, if her side don't deliver on Saturday and she is keen to right the wrongs of that league final defeat.

“I can't wait, we want to try and prove that the last time we played them that wasn't how we play football. Why we want to prove to ourselves that we can do better.

“Nothing seemed to go right and we want to show that the day we played Donegal that is the way we play football and we can be better than that.

“They gave us a good battle the last day and I think they'll know we will be up for it this time. They will know that we want to better ourselves. They have improved since that game as well, so it will be a tough game for both teams. Kerry will want to prove that it wasn't a one time thing and we want to prove that we can do better that what we did the last time.”

Louise Ní Mhuircheartcaigh is one of Kerry's danger-women and Grey is keen to test herself against the best forwards in the country.

“We will have to wait and see, I had a good battle the last time,” Grey said.

“There was a stage I played half forward and then I played wing-back and now I am corner-back. I do like corner-back and I do enjoy it. The simple things tend to work and that is all you have to do there is no point in trying to do the Hollywood stuff, just stick to the simple stuff and do everything right.

“You want to go out and better yourself, you have to compete at the top level and all the Kerry forwards are top quality. It is a challenge to try and mark those players and to try and overcome them.

Since that defeat Armagh's curve has gone upwards. They have hammered Monaghan twice, drawn against All-Ireland champions Meath and then clinched the Ulster title after that thrilling win against Donegal. And the Orchard women now know they can compete with the best and don't know when they are beaten.

“The girls never doubted that we would get the job done [in the Ulster Final]. It is a lesson to not doubt ourselves and believe that we can do it,” Grey said.

“I think that last day against Kerry we panicked a wee bit and that is something we worked on and you saw against Donegal that we didn't panic and we took our time to get our scores. The last day [against Kerry] we panicked and we gave the wrong pass or taking shots that weren't from great shooting positions.

“When we are going well we do go well, there is always some bits that we maybe don't get perfect but we will work on them until we get them perfect. We know that we can contend against the likes of Meath and Dublin.”

Grey already is rubbing shoulders with the best of them as after a busy day's work at the pharmacy. - “I just love talking to people, chitter chatter,” and playing football and training, the Dromintee star is a sports masseuse.

“I don't get to chill out. I do sports masseuse, so I be flat out at that. Football, gym, work and more work. I don't get a minute.”

You can see why New York might seem appealing but Grey insists that she belongs with a special bunch of players.

“You do have your tough days and you wonder what you are doing and when you lose you wonder why are you spending all those nights training,” said Grey.

“But there is nothing else I could be doing, because I love going every Tuesday, Thursday and Sunday. Especially, the girls make a good part of it, you love to see them and have the craic with them and then it just gets better whenever you are winning.

“All the girls are so positive, there is no negativity in the camp. Everyone is buzzing for the championship. Because we had a good run in Ulster everyone is in good form and we want to prove that Armagh are near the top and that we can get there.

“That's what you do for the girls you are playing with, when you pull on the jersey you just literally fight to the end and give it your all.”