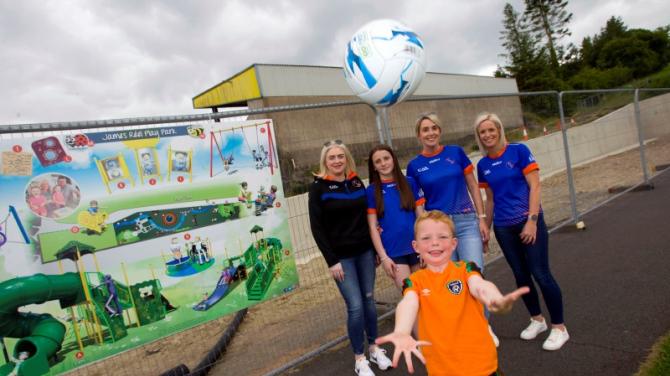 THE James Reel Memorial Play Park will be opened before the end of the year and sisters Majella and Aisling can be proud of the fitting tribute to their late brother.

James tragically died in April 2021 and in November last year, the family launched Time2Play to build a playpark at Silverbridge GAC grounds and since then they had brilliant fundraisers which saw Armagh play Tyrone in the Athletic Grounds in December and then the look back at 2002 event at the Carrickdale.

The sisters are so thankful for all those who have contributed to the fund, they say they aren’t far away from their target but made clear that not one penny has come from the lottery or council.

Majella and Aisling have a clear vision for what they want for the playpark. They’re good craic, they finish each other sentences naturally, so forgive me if some of the quotations are attributed to the starter and not the finisher of what was said. The Democrat called out to Silverbridge and a lot of impressive work has been done to get the area ready for the park.

“We hope to finish it before the end of the year,” said Majella.

“We launched the video on November 27, so we are not too long into it and things have gone well. “It would be nice to get to a closure because people have been supporting it and so good and to open it up and give it back will be something special. It will remind us of why we are here and James and it will just be lovely for that to.

“The day the diggers came in Maisy and Sadie came up and the first thing they said, 'is Daddy's park being built today?

“The children have been with us in this journey and they are clued into it.

“It is difficult with why we are doing it, none of us want to be here and even though it is all good and everyone is fantastic it is all for the one person and it always comes back to James.

“When you see people wearing the jersey, you know they either knew James or know us or following Time2Play.”

The sisters insists that the playpark will have something for everyone, which will also include a reflective garden and an aluminous clock.

The roundabout will include access for a wheelchair, the slide will enable an adult to take a disabled child down it, it is double one and there will be basket swing so a child can lie down on it.

“We are hoping it will be fully inclusive,” said Aisling.

“Something for everybody, sensory stuff, swings, slides and there will be wee hopscotch things and interactive stuff.

“The play park is going to be for the children and the seating area for mums and dads to sit down and have lunch or a cup of coffee and even older people as well can sit down. We have the walking track here so it will compliment that.”

Because the park is built inside the Silverbridge GAC grounds and in a remote area it didn’t qualify for any additional funding or grants, so the bit of work being done at the ground was paid for through fundraising.

It is all from fundraising, we have received no funding,” said Majella.

“The Armagh Christmas Cracker, the Armagh 20-year anniversary in the Carrickdale, we launched our jersey's and hoodies since and we had a wee fun day. Over a 1000 units have been sold of jersey.

“Everyone is going on holiday's and taking photos in their jerseys and tagging us. And it has been really lovely, and lovely for us to see it but nicer that people are thinking about us, taking the picture, and showing us a bit of love.”

And her sister appreciates the kindness directed towards the family and is happy with the fundraising campaign.

“People aren't taking photograph's and tagging Armagh GAA or Down GAA, they know how important this is to us, so they are taking time to tag us, which is lovely,” said Aisling.

“Everything we have done so far, we have given and taken a little, we haven't been begging for money.

“We said that we weren't going to standing with buckets looking money and giving nothing. It has made us a bit prouder of what we have done. The night in the Carrickdale for £30 a ticket, you got goody bags, got entertained, bubbly on arrival and the Christmas Cracker was only a tenner in Armagh v Tyrone. And the jersey's. We are proud of the campaign. We worked hard on it and we have reaped the rewards and it has gone really well.”

The campaign was named Time2Play, so it shouldn’t come as a surprise that a clock will feature at the park and the sisters said that it was something the family members wanted to do and will pay for.

“Paddy our other brother and James' wife Mairead and our dad Bernard are buying the clock between the family,” Aisling said.

“It is their contribution and the whole tag-line was Time2Play and it was what we were saying, make time for family, make time for friends and we feel it is fitting to put a clock in.

“It doesn't matter where you are, whether you are training or on the walking track then you can see the time. It is not that life should be rushing past you but it is nice to know the time when you want to and it is going to be illuminated at night and it will look well.”

Of course, the price of things have rocketed since the inception of building the park but the family are almost in touching distance in terms of having enough funds to deliver everything they want.

“We are close to be where we need to be however, like everything else, prices are going up and have gone up, the cost of equipment, concrete, blocks,” Majella said.

“We are not 100-miles off. The play-park is ordered and we will have the wet pour. The reflective garden, there's work to do and other things we would like to put in.

The sisters are open to the idea of holding one more fundraiser and are proud of the tribute being paid to their late brother.

“It is an amazing legacy for James and not many people have a legacy like this,” said Majella.

“This fits James mould, we used to call him the Pied Piper because before he had kids, he had our kids with him everywhere.

“And when his family were going away in the caravan, he would be looking out to see what parks are available for the kids. Obviously, baby James wasn't born when James passed away and now baby James is 11 months old and he will be able to waddle into the park.”