Pleased to Meade you, hope you’ve guessed my name! 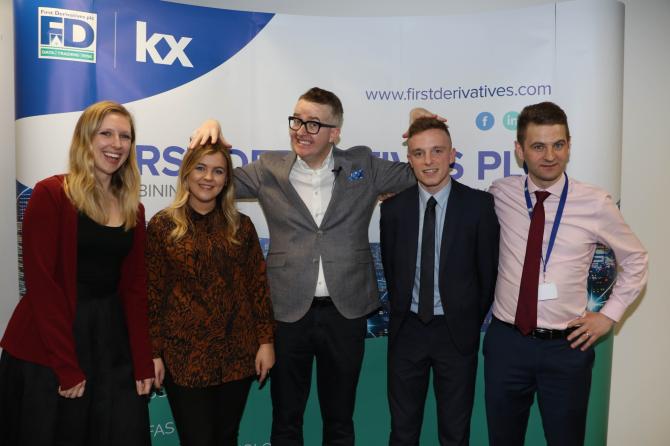 MINDREADING mentalist David Meade returns to the Town Hall on April 26 following the storming success of his sell-out show there in February.
As part of his brilliant new Brainman tour, Meade returns to his Newry happy hunting ground to astound, bedazzle, subvert and inveigle the minds of his devoted faithful, replete with his razor-sharp repertoire of teak-tight one-liners and astonishing mind trickery that simply have to be seen to be believed.
Explaining the concept behind Brainman, the irrepressible mind reader said: “Brainman is all about the audience doing amazing stuff, so one of the big things that we do is that it's the audience who does the big trick at the end, we teach them how to read someone else's mind.
“So 10 or 15 people out of the audience look at a person and work out what they're thinking, so it's one of the hardest things that we've ever done.”
He said that, for him, the unpredictability and electricity of a live performance is hypnotically seductive.
“Because we're gifting people that ability it means that show is so changeable. We've no idea what every night is going to hold and that's what makes it fun and interesting,” he said.
“As long as the audience laughs that's all that matters but I work really hard to make sure that they're entertained as well as amazed.”
Meade's mind-bending performance juxtaposes elaborate mind-games with cerebral wit and word-play that has hallmarks of the verbal and linguistical dexterity of Groucho Marx and, speaking to him, it's clear that Meade's a real disciple of comedy.
“I think comedy that you need it in it. That's what makes it feel entertaining. I love great comedians, I follow them around and I watch more comedians than I do mentalists or mind readers,” he said.
“I think of stand-up as the perfect art form. One of my favourites who I saw recently was Dara O Brien, in the Waterfront Hall. You think about it, that's 2,400 seats, he has no set, no lights - nothing, just a microphone. He didn't even have water for them two-and-a-half hours.
“He's got this incredible memory and works with wit across the audience and learns about them and uses that across the show. I think that's what I try to do but do it with mind-reading.”
David was more than happy to set the record straight as to where his interest in the mind was first piqued.
He said, “I was fascinated with psychics and how they seemed to be able to tell you impossible facts about yourself and I can assure you I'm doing exactly the same thing that the psychics are doing. Imagine I was telling you I was talking to the dead. Because I'm so accurate you would believe it.
“I started studying psychics when I was 12 or 13 and then when I got to 15 or 16 I started understanding the psychology of how to make people think of things, how you make people buy things, how you put thoughts inside of their heads.”
Meade said that the fastidious nature of his quest in understanding all things mentalism took him from the far reaches of theology, to studying cults and popular marketing concepts and theories as he tried to harness the incredible power of language.
“I studied religions, marketers, politicians and even hypnosis and that sort of stuff,” he added. “It's incredible to me, the power of words. One word in or one word out can change a person's mind in a heartbeat, it can make you buy a house or a car.
“I love it and because every audience is different I like that it's always a new test.”
The mind reader explained that he builds a show in reverse chronological order, starting with the twist or even only a morsel of an idea on which he builds upon and layers.
He said, “For me, it always starts with a big ending, so what is the ending, what's the surprise? What's the twist? If you start with that and work backwards you can come up with the reasons why that's all important.
“That tells you what all the ingredients are because the big ending should have all the ingredients and then the whole journey up until that are looking at all the teeny bits that you need to build into.”
The workaholic openly admits that a fear of failure and letting people down propels his frenetic, tireless work ethic.
“It's the fear of knowing that we've sold 10,000 tickets already and I haven't even written a show, it's terrifying,” he said.
“On the first night, I sit behind the curtain and I hear 700 or 800 people out in their chairs and I think 'What are these people doing here?' It's madness, but I wouldn't have it any other way, it beats working for a living,” he chuckled.