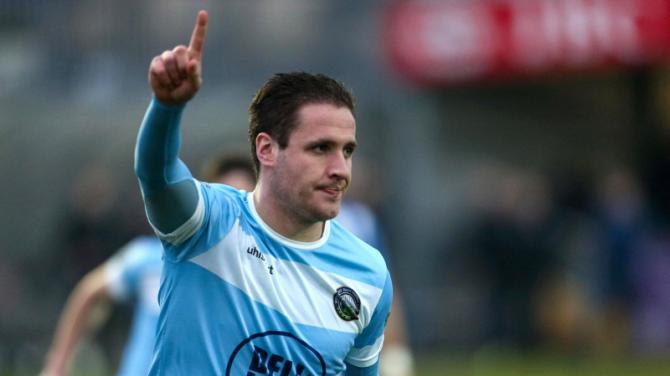 WARRENPOINT Town manager Barry Gray says his side will not be getting carried away with Saturday's super Danske Bank Premiership win over high-flying Coleraine.

Alan O'Sullivan netted twice as relegation-threatened Town left the Bannsiders shell-shocked. Either side of his goals, Jamie Glackin equalised for Coleraine, but Brandon Doyle's stoppage-time effort sealed the three points for Gray's side.

The result takes 'Point to within two points of second-from-bottom Institute in the basement battle in the Premiership. On having it put to him, that pundits were describing the win as 'the shock result of the local season', Town manager Gray told the Newry Democrat: "They'll call it, what they'll call it! "What it is for us, is three important points, nothing more, nothing less.

"It's certainly a boost for the players, and especially from their point of view, I am delighted to see it.

"They were told on Saturday to go out and enjoy it. “It's been tough on them for months and months." However, whilst Gray wanted his charges to take in the well-deserved plaudits, there is also a cautionary tale.

"Well we won't be reading too much into the hype," he said.

"It was a big win, and it can be easy to get carried away in situations like this."

He also praised his match-winner O'Sullivan: "Alan has been brilliant since we came back into the club. He works hard and to be honest at times on Saturday, he tore Coleraine apart. It shows the type of player we have there."

Gray was also keen to shower praise on those in his back-line too who kept Coleraine's danger to a minimum.

"(Ben) Mullan had his first start at centre-half.

"He's a young player and showed great assuredness and was very calm - it was an impressive performance.

"You don't want to single out players too much after a performance like that, because they all played their part in a superb showing.”

Warrenpoint will certainly have had a confidence boost from this result, but the difficult challenges remain - on Saturday, Crusaders visit Milltown.

"A nice easy one to get back to," joked Gray.

"The Crues are a top team, but it's no surprise. We knew this period of playing some of the top teams was on the horizon, but hopefully a result like this one, should be just the boost the boys need to take into this series of games."

Gray knows picking up points going towards the festive period will be crucial to their chances of climbing away from the danger zone come the second half of the campaign.

After the match with Stephen Baxter's side come games with Ballymena United, Dungannon Swifts, Linfield, Larne, Institute and Glenavon between now and the end of 2019.