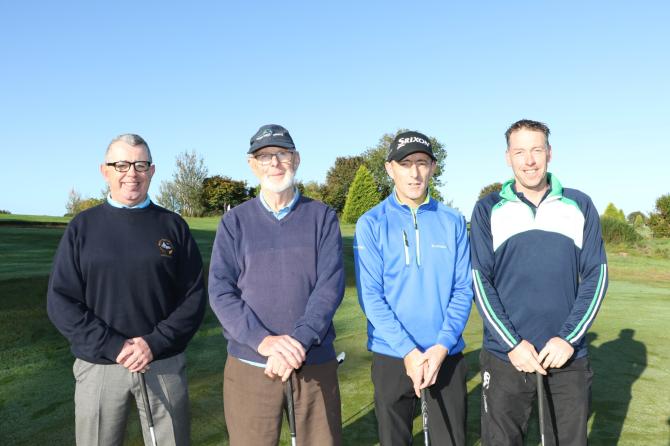 WITH the remnants of Storm Callam threatening to completely scupper the past weekend's stableford competition members were mightily relieved to see Sunday dawn 'Callum-less' and dry.

When all the cards were tallied it was Neil Heaney who emerged well ahead of the pack with a fantastic score of 44 points.

Neil, who narrowly missed out in registering a weekend win during the qualifying season, finally turned in the round he had striving for in recent weeks.

After a timid start, with just three points on the board after three holes, Neil's round burst into life with a chip in for birdie at the fifth.

Another birdie at the ninth saw him finish the front nine on a high and he kept the momentum going with a terrific back nine which included six pars and another superb birdie at 17 which left him just two over for the inward stretch.

Taking second and third place was a bit tougher to decide as three players returned a score of 41 points. These men were Gerry Hughes, Tommy Farrell and John McEvoy.

Unfortunately for John he missed out on this occasion as the count back rule came into play. It was Gerry Hughes however that was given the runners up spot as he played steady golf on the way in with three pars at the 10th, 13th and the 14th which helped him see off the challenge off Tommy.

Tommy’s round also included three pars on his back nine however these were cancelled out with two double bogeys to cost him a higher placing.

This week saw six twos being returned with John McEvoy being the happiest of the bunch when he recorded back to back birdies at 11 and 12. Others joinng him were Edmund Heaney, Patrick McGivern, Joe Boyd and Mark O’Neill.

This week's winner of the Autumn Cup was John McEvoy with a brilliant score of 29 points.

John played steady golf throughout his round to record six pars and six bogeys to finish four points clear of the rest of the field.

In second place on 25 points was Joe Boyd with Phelim McEvoy, taking third on 24 points.

This week sees the first ever night golf at Mayobridge. This will take place on Saturday evening from 7pm with food and music in the club afterwards. This promises to be a great night’s entertainment on and off the golf course so members are asked to book a slot in advance.

There is also a non-qualifying competition on Saturday and Sunday with the midweek Autumn Cup continuing from Monday through to Thursday.