Charlotte living in dreamland with Arsenal 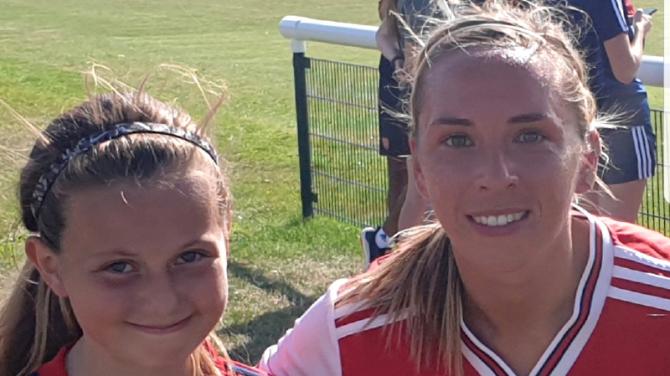 CHARLOTTE Havern is living in dreamland. Just over a week ago the nine-year-old from the Doctor’s Hill in Newry made her debut for Arsenal Women’s U12 against Swindon Town (at Swindon).

And not only did Charlotte play well but she scored a cracking goal. And the next day the soccer-mad youngster turned out for Arsenal’s U10 against Swansea City at the London University of Hertfordshire. Again she had a great game and once more she scored a goal.

Charlotte, a St Joseph’s, Bessbrook Primary School pupil, was contacted by the Arsenal Development officer Tom Harley and given a place in the Arsenal Women’s International Players Development Programme. She will travel to London four times a year to participate in training and matches.

Father Stephen, who formerly played in goals for Glenavon and Banbridge Town, is absolutely delighted with his daughter as he told the Democrat: “I’m so proud of her as are her mother Niamh, brother Adam and sister Connie. She is so dedicated and enthusiastic and her dream is to play with Manchester City and Northern Ireland. In fact recently she was offered a place with Manchester City but it would have meant she had to live in Manchester, so we reluctantly had to turn it down.”

And although only nine-years of age the richly-talented Charlotte has had a packed football career. In 2018 her Linfield team, coached by Paul Allen, won the U9 Cup and this year she played for Linfield U11 as they won the Foyle Cup again.

Charlotte was voted Linfield’s U11 Player of the Year for the past two years and she is currently the captain of the side.

Formerly Charlotte played for Newry team Midway under Decky Larkin and Gerry McDonald before moving to Windmill Stars where she was coached by Ciaran McLogan and Sean Gallagher.

Last year she was part of the Linfield team that won the Banbridge Rangers U9 tournament where she also scored in the final. Furthermore Charlotte also netted in the final as Linfield won the Phone-a-Cab Youth Cup.