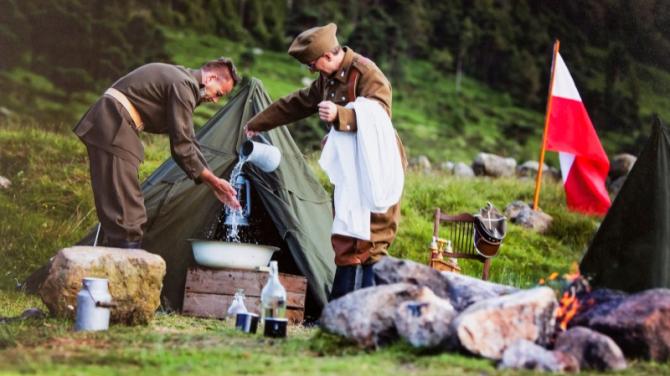 A SERIES of events have taken place in Newry to mark the outbreak of World War Two, including a Polish exhibition at the Sean Hollywood Arts Centre.

From the Cathedral, events then moved onto the cenotaph where Polish Consul General in Northern Ireland, Pawel Majewski laid a wreath in memory of those lost during the war.

Their stories have now been relayed, using the art of Anita Hoppe’s photographs, which uses landscape to re-create the experience of the Polish soldiers.

The core of the exhibition focuses on photographs relating to the Polish defensive war of September, 1939.

The next part moves onto the involvement of Polish pilots who made it to England, via Romania and France in the 1940 Battle of Britain.

Photographs are also in the exhibit from the western front, whose story started with the Allied landing in Normandy of on June 6th, 1944. They showcase the soldiers of the Polish 1st Independent Parachute Brigade under the command of General Sosabowski, which participated in the Market Garden Operation in the Netherlands.

The war resulted in the deaths of around six million Polish citizens.

After the post-war conferences of Tehran, Yalta and Potsdam, Poland saw significant changes to its borders, as the country was to spend the next 44 years behind the Iron Curtain of Eastern Europe.

The political change which swept Europe in 1989 saw things change for Poland, enabling the country to join NATO in 1999 and the European Union in 2004.

Jerome Mullan, of the Polish Council for Northern Ireland said it was a hugely successful day, and people should not forget the impact that World War Two had.

“From a Polish point of view, to bring to a Northern Ireland population, the story of the devastation on socities that World War Two brought was very important.

“Six million Poles lost their lives in World War Two, a very stark figure. People should not forget what could happen again, but what should never happen again.

“The casualties and loss of life the war brought was huge. Young people today should know what happened in Europe in that period, and especially against a backdrop of Brexit, we should never forget the European Union brought 80 years of peace. We fight politically still, but we don’t kill each other.” Meanwhile, The David Cross Foundation for Peace and Reconcilliation is also celebrating the 80th anniversary of the outbreak of hostilities. Sir Dermot Turing, author of author of “X, Y and Z - The Real Story of how Enigma was broken” will deliver talks in Belfast.

“A shared history educational programme is being delivered in partnership with Action for Community Transformation Initiative (ACT). Through a series of talks, events and art interventions, we will explore the historical links between Poland, Northern Ireland and the UK that developed thanks to our shared history. Many people may not be aware, but in the first two years of the Second World War, Poland was the UK’s biggest and only alliance supporting them in the war effort, including Polish Air Forces in the Battle of Britain.

“I’m therefore delighted to welcome Sir Dermot Turing to Belfast to kick off the programme. The remarkable story of the joint effort of Poland, UK and France codebreakers is often forgotten. And there is no better time than on the 80th anniversary of the Second World War to reflect on how important the collaboration really was. I also want to thank the David Cross Foundation for Peace and Reconciliation for their support. This is a fascinating project, and we hope it will have a positive impact on communities.”

Speaking about his visit to Northern Ireland, Sir Dermot Turing, author of ‘X, Y & Z - The real story of how Enigma was broken’ said:

“The achievements of Bletchley Park and the British code-breakers are widely understood to have helped shorten the Second World War by up to two years. What is less well known is how much the British were in debt to the work done in Poland on the Enigma problem before the war began. This is not just the story of an international treaty, because at its heart is a story about people – in some cases, intriguing and eccentric people – bound up in wider events they could not themselves control. All the elements of a classic spy story are here: clandestine meetings, midnight escapes from the Nazi police, betrayals – and at the centre of it all, an amazing piece of mathematical analysis. This all adds new spice to the already extraordinary story of Bletchley Park.”