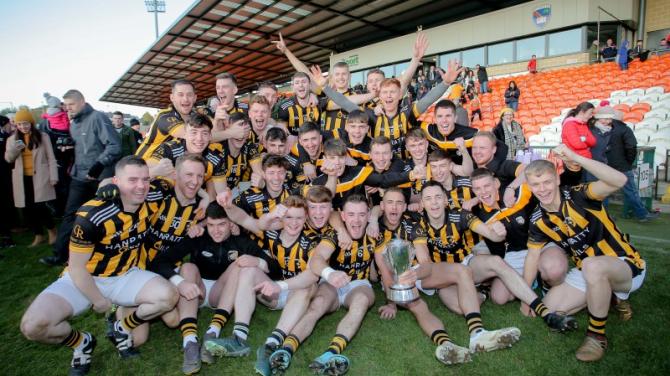 IT bordered on the ridiculous because how Crossmaglen turned the game around to put Ballymacnab to the sword and clinch their 45th Armagh Senior Club Championships title was simply breathtaking.

While it was heartbreaking for the magnificent Ballymacnab, Crossmaglen's second half performance was one of beauty because with each passing minute every one of the 4,332 people in the Athletic Grounds were aware they were witnessing something special.

It was a performance to awe as Rangers dismissed Ballymacnab's five-point lead and finished convincing nine-points winners.

Kieran Donnelly agreed and was delighted,saying it was a coming-of-age game for so many players.

“I’m not pulling any punches but you asked me a few weeks ago is there any more in this team and I said there was and today is what it is all about,” said Donnelly.

“In the second half in a period of 15 or 20 minutes, we showed what these boys are capable of at this level.

“But we have to produce it on the pitch. It is OK in training and we see behind the scenes, but that is no good if you don’t go out and do it in big games.

“They are the boys that did the business and they are a special bunch because I think there is six changes from last year’s team and those players have come through Minor and won Ulster Minor and we went through a wee spell when we thought that we might get no players from that team and we were worried.

“But today seven or eight of those players won Ulster Minor titles three or four years ago and that is what it is all about. Every year if you can add one or two young players to an experienced panel then you should have a decent team. It is a very enjoyable win.”

The sun was shining on the Athletic Grounds on Sunday and it was Ballymacnab who ruled the roost for much of the first 30 minutes.

With seven minutes gone the sides were level, Oisin O'Neill's long-range effort split the posts and Cian McConville pointed a free for Cross, while Rory and his brother Jack Grugan hit back with scores for Ballymacnab.

It was tense, yet not really cagey as both teams pushed for the jugular but both defences were on top with Paul Hughes mopping up for Cross and while James Gray was getting his hand in to break ball for the Nab.

Colin O'Connor, playing in his first Final, edged Rangers ahead after quick-thinking by Oisin O'Neill and Hughes and Oisin O'Neill tagged on another after a clever one-two with his cousin Cian McConville.

Paul Meegan pulled back a point for Ballymacnab and he was desperately unlucky not to have added another with his next two shots, his first actually bounced on the top of the post, while the other hit the post.

Then came the opening goal, Armagh captain Rory Grugan kicked long down the right flank to his brother Jack who delivered a sweet 35-metre pass across the pitch to the incoming Gavin McParland and without breaking his stride, McParland coolly slotted low and into the net. It was a stunning goal and Ballymacnab were in business.

Stephen Morris and Oisin O'Neill kicked wide as Rangers seemed out of sorts. Ballymacnab were winning most of their battles but Cross always pose a threat.

Jack Grugan's converted free put a goal between the teams but Rian O'Neill (free) grabbed his first score after Mel Boyce was fouled but Rory Grugan replied with a fine point after receiving a quickly taken free from his brother.

The Nab were dictating play with Pauric and Cormac Gribben immense in midfield, Brian McCone being a constant outlet and McParland and the Grugan brothers looking dangerous.

But Cian McConville's point closed the gap to a goal as Cross trailed 0-06 to 1-06 at the break and Cross boss Kieran Donnelly wasn't happy with the first half performance.

“I am not making excuses but we didn’t play in the first half,” said Donnelly.

“Credit to Ballymacnab, they had a game-plan and we just fell into their traps and we played as individuals and not as one.

But at half-time I don’t think I needed to say a big pile to be honest. The players knew that performance wasn’t good enough for that level and if we were going to go out and get beaten then we need to go out and at least try.

“There was only three points in it at half-time. We were more concerned that we hadn’t turned up to play football and anything we had talked about went out the window.

“We got a real awakening in the first half, a serious awakening and we were in trouble and there is no point in saying anything different.

“But we showed our courage and character and we showed young players and old came of age in that jersey. Even the older players came good and I am delighted for the lads because they put in a serious shift.”

Jack Grugan and Rian O'Neill traded points but a brace of points from midfielder Stephen Morris suggested Crossmaglen were starting to find their stride.

But those thoughts were forgotten when Rory Grugan fired towards the edge of the Crossmaglen square, big Jack Grugan threw full-back Rico Kelly out of his way before punching into the net.

Jack followed this up with a punched point and with 38 minutes played the Nab led 2-08 to 0-09 and they had their sights on making history by winning their first ever Senior title.

By 47 minutes that plan was in tatters as Cross hit nine points in as many minutes without reply to lead 0-18 to 2-08.

It was sensational and enthralling, Rian O'Neill and Alan Farrelly were plucking balls from kick-outs and substitute Kyle Carragher won almost everything fired into him.

Oisin O'Neill converted three frees in as many minutes and Paul Hughes chipped over a point. Farrelly then rose highest to make a mark, he played a quick one-two with Aaron Kernan before stroking his shot over the bar to level the score 0-14 to 2-08 with 44 minutes played.

The tide had turned and the Nab could not live with Crossmaglen's relentless pressure. The brilliant Callum Cumiskey edged Cross ahead before Hughes bagged his second point and Mel Boyce also fired over after his shot clipped the crossbar.

There wasn't time to catch your breath as Cumiskey's second point from the outside of his boot gave Rangers a 0-18 to 2-08 lead before Tony Kernan was brought on.

Cross were on fire and Oisin O'Neill was furious when play was called back for a free-kick and the determination was clear to see.

The Nab were living off scraps and they tried going route one but Man of the Match Rian O'Neill was on his own goal-line clearing the danger.

Cross were in cruise control and Colin O'Connor's cracking goal on 56 minutes only sweetened the victory and then Oisin O'Neill capped off a fine second half performance with his goal in additional time after Tony Kernan set him up.

It was a thrilling victory and one that Crossmaglen will enjoy, despite what people think according to their manager.

“That is an absolutely amazing feeling, people talk about us and Crossmaglen winning championships and not celebrating, let me tell you that is rubbish,” said Donnelly.

And Crossmaglen will now face Clontibret who is managed by former All-Ireland winning Crossmaglen captain John McEntee and Donnelly is keen to make headway in the Ulster Championship.

“John knows all about us, he will be delighted with the result and congratulations to him because he went to Clontibret and they are a brilliant club and to beat Scotstown is no mean achievement,” Donnelly said.

“We will look forward to it, but as I said before we do celebrate winning championships in Cross and we will celebrate it tonight.”