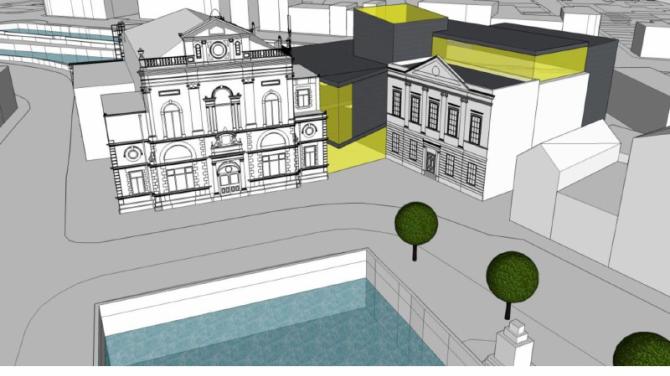 THE Newry Democrat understands that ground work is due to begin this week on a proposed 90-120 bed hotel on the city's Downshire Road.

It comes as the Chair of the council's Strategy, Policy and Resources Committee told this newspaper that there is “great potential” for the Newry Civic Centre and Regeneration Project to secure the city's economic potential for future generations.

Planning permission for the hotel is about to expire, but with work being carried out it grants the developer, the Conway Group, an extension on the application.

The Conway Group have previously worked with Premier Inn to develop hotels in cities such as Lisburn and Derry. We asked the Conway Group for a comment, however nobody responded to our request for an interview.

On Thursday night the committee agreed to put forward four recommendations for approval at full Council that form part of an Outline Business Case for the project.

Key to these recommendations is the approval of the location of the augmented Theatre/Conferencing facility on the Ross Thompson site adjacent to the Town Hall and Sean Hollywood Arts Centre.

Councillors also agreed to the separate procurement of the Theatre/Conferencing project from the other Civic Centre Regeneration project elements.

These four items were passed for recommendation for approval at full council in July including the Ross Thompson site for the Theatre/Conferencing centre. The Civic Centre and Regeneration Project site will be identified after further soft market testing over the summer months and I believe preferred options will be identified for consideration in the autumn.

The proposed spend in Option 7c outlined by the consultants by council is in excess of £20 million - not £35 million as has been stated by some commentators - with a further £10.8 million of private investment in the potential development of a hotel.

Councillor Michael Savage explained that the scheme has been part of the Council’s Corporate Plan and has been included in the Capital Budget for the last two years.

“I believe there is huge potential for this scheme to secure a significant return for this city and secure its economic potential for future generations,” he said.

“As we develop the Business Case it is essential that we have further meaningful engagement with the Business Sector and other key stakeholders and ratepayers across the city.

“There has been a positive meeting last week with the Newry Greater Vision Group and further meetings are planned with Newry Chamber of Commerce and Trade and Newry Bid members to discuss the project in greater detail. I believe there should be consultation with local ratepayers on this project when locations and more details on the scale and costs of the schemes have taken shape over the coming months.

“This will provide the business community and ratepayers with the opportunity to engage with Officers, Councillors and Consultants on the regeneration plans.”

Cllr Savage attended a briefing earlier this month regarding the need for hotels in the area at which he spoke of the need to recognise the hospitality businesses already in place in Newry.

“I flagged up the existence of excellent hotel stock in the city already namely the Canal Court Hotel, Francis Court Hotel, Flagstaff Lodge and the Mourne Country Hotel with another 90-120 bedroom hotel planned for the Downshire Road area of the city,” he said.

“These hospitality businesses have invested heavily in our city and this needs to be recognised in how we proceed.

“I was assured by CBRE that the hotel stock outlined, including the planned hotel on the Downshire Road, will meet current demand and any proposed new hotel will meet new demand that is anticipated will be generated through the development of the new Theatre and Conference Centre, the Civic Centre and Class A Office Accommodation.”

He added: “The consultants have outlined that there is a strong need for Class A office accommodation in Newry and have pointed to the Regus Group as just one potential interested party and I am aware of other firms that have expressed interest in Newry as a destination with Invest NI.

“The engagement with businesses in that sector both local and external to Newry over the coming months will further shape how we maximise the office accommodation opportunities that are out there for this city.”

Cllr Savage says he makes “no apologies” for wanting to make sure that the promises made to turn Newry into a vibrant city is realised.

“I want to be ambitious about the future of this city and its young population,” he said.

“I want us to create a thriving economy that builds on our excellent indigenous businesses and retail sector.

“This project can be the stimulus that enhances existing businesses in Newry and brings new firms to our city.

“In order to do that we must show ambition for Newry and we must develop a regeneration programme led by the Council that will enhance the business, tourism and social fabric of our city.

“I believe this project which will be shaped over the coming months, with input from the local business community, can be the catalyst for significant economic growth for our city and its people.”