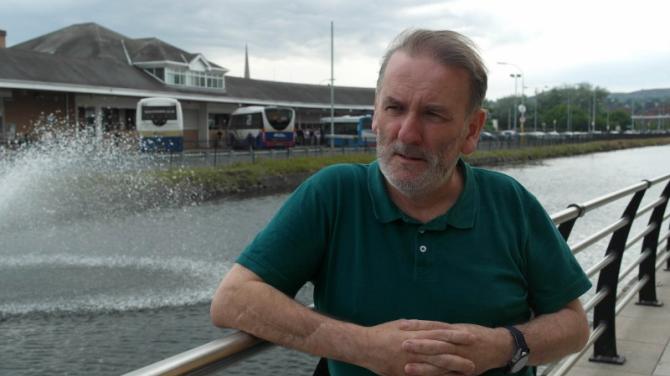 IUR Cinn Fleadh will kick off this year with Kieran Cunningham's brilliant one man show, From the Cradle To The Grave: As Seen Through The Eyes Of Dave Allen.

Cunningham, a former student at St Joseph's High School and Newry Tech has been a long time fan of the late and revered Dublin born comedian, and satirist.

The actor, singer-songwriter and comedian is currently in Kentucky shooting a film, and the Newry Democrat caught up with the promoter of the show, Des McDermott of MC Promotions.

He told us what audiences can expect from the show which will feature Cunningham on stage in the familiar Allen scenario – besuited and high-stooled, with glass of whiskey close at hand.

About half of the material is Cunningham's own, while the other half is classic Allen.

“People will absolutely enjoy the night, from start to finish ” said Des.

“If you were a fan of Dave Allen, Kieran carries it out to a tee. The Manchester Evening News described it as being 'vocally perfect.' Now that's a pretty bold statement, but he is that.

“He has got Dave Allen's movements, and everything about him down perfectly. It's just Dave Allen that you're looking at.

“The show is an hour and 20 minutes long, and then there's a break in the interval, so that people can top up their drinks or whatever.

“The laughter among the audiences has been incredible, and another thing to point out is that it is a family show. There is never a swear word in it.

“Kieran covers Dave Allen's life as well as the comedy side of things. He keeps the Dave Allen humour there all the way through.

“I have spoken to young people who have come to see the show who did not know who Dave Allen was, and they were leaving there as fans.”

Kieran Quinn has been living in Manchester for the past 14 years and has performed to sell out audiences in every Theatre House up and down the length and breadth of the UK, from the Royal Exchange Theatre Manchester to London’s Phoenix Theatre in the West End.

Closer to home, he has performed to a sell-out audience at the Assembly Rooms Belfast as part of the Cathedral Quarter Arts Festival, and to another full house in the Andrew's Lane Theatre in Dublin.

On stage, he has performed in plays such as Grace in America, Speed the Plow, The Pied Piper, Aladdin, Kes, Romeo and Juliet, The Flags and Our Day Out.

However, his biggest success has been his likeness to Dave Allen and his one man show dedicated to him called: At Large – A Journey Through Life. Kieran has taken this across Europe and America and now he intends to do the same with this wonderful new show.