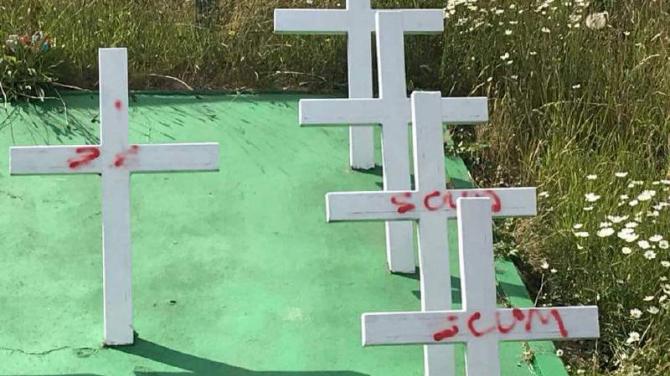 NEWRY and Armagh MLA Megan Fearon has described a series of attacks on Hunger Strike Memorials as outrageous.

The attacks took place overnight at 1981 Hunger Strike memorials at Fords Cross, Silverbridge, Meigh Village and on the Newry A1 bypass.

The Sinn Fein representative said these attacks were attempts to “insult and antagonise”.

“All memorials should be treated with dignity and respect and should not be targeted in this way,” she said.

“I have no doubt that the Republican community here will rise to the occasion and restore the monuments to their original states.

“I would call on people not to be lured into a situation where they feel they must respond to this act, that is not to the benefit of Republicans.

“All memorials should be respected and treated with the respect and dignity they deserve. There can be no place for these incidents around monuments, memorials and other places where people remember their dead.”

Meanwhile, Saoradh's Stephen Murney described the attacks as cowardly and said those who carried out the vandalism offer nothing to society.

“Just weeks ago we gathered at the monument with some of those activists who originally erected it,” he said. “Not only was this monument vandalised but the tributes we left on it have also been removed.

“In the coming weeks Newry and Bessbrook are going to be subjected to dozens of unwanted sectarian parades, those parades like the desecration of this memorial, are only designed to create tension.

“Sinister attacks such as this certainly won’t deter Saoradh and our activists from remembering our fallen martyrs. Those behind this attack have absolutely nothing to offer society.

“Attacking memorials in the middle of the night is a sickening act and one which will be condemned by all. Such attacks are fruitless and certainly won't deter us from our path of revolution.”