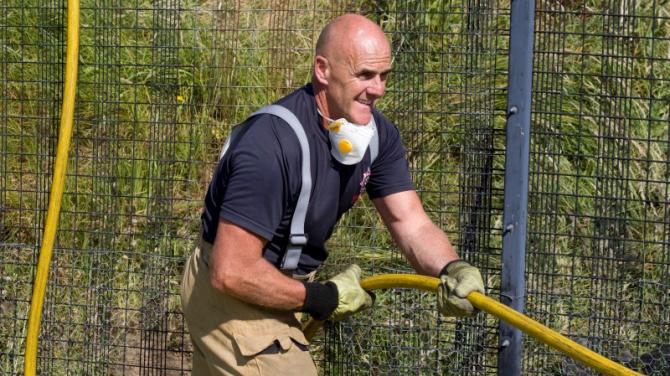 THE alarming number of grass/gorse fires attended by officers from Newry Fire station over the last week serves as a reminder of the dangers the current spell of hot weather can bring.

Figures obtained by the Newry Democrat from the Northern Ireland Fire and Rescue Service (NIFRS) confirm that there were 36 such incidents in the period from June 24 to July 1.

One of these took place at the rear of the Threeways Community Association building on High Street, a fire that was, thankfully, brought under control.

With the current hot spell set to continue for another 10 days or so, NIFRS have issued advice reminding everyone to act responsibly and to heed fire safety advice to prevent gorse fires from starting.

“Often the dry conditions, like we have seen in recent weeks, can lead to an increase in the number of gorse fires we attend.

“Whilst many of these are started deliberately, gorse fires can also be caused accidentally by something as simple as throwing a cigarette from a car window, leaving a glass bottle on the ground or not extinguishing a barbecue properly.

“A seemingly innocent mistake could well cause a severe gorse fire that destroys acres of countryside and ties up firefighting resources for prolonged periods.”

Last year (2017/18) NIFRS attended 2,072 gorse fires across Northern Ireland, a figure which represented a 27 percent increase from the previous year.

Since April 1 this year, the service has responded to 934 gorse fire incidents.

“The Fire and Rescue Service doesn’t want your summer to be affected by fire or tragedy –we are appealing to the public to take simple fire safety steps, act responsibly, remain vigilant to danger and help us in our work protecting our community,” continued Group Commander Smyth.

“It’s not just the larger fires on hillsides and mountains that impact upon resources, the smaller fires involving grass and bushes also need to be dealt with quickly as they have the potential to spread and develop into bigger fires. Attending such incidents puts additional pressure on our people and our resources.”

NIFRS has urged the public to heed fire safety advice to protect themselves and the countryside, and has issued the following advice to all.

· Only use barbecues in designated and safe areas and never leave them unattended.

· Keep children and ball games away from barbecues.

· Ensure that barbecues are fully extinguished and cold before disposing of their contents.

· Do not leave bottles or glass in woodlands. Sunlight shining through glass can start a fire. Take them home or put them in a waste or recycling bin.

· If you see a fire in the countryside, report it immediately to the Fire & Rescue Service. Don’t attempt to tackle fires that will take more than a bucket of water to put out. Leave the area as soon as possible.

· Report any suspicious behaviour to the Police.