MLA Wells rules out going to watch Down 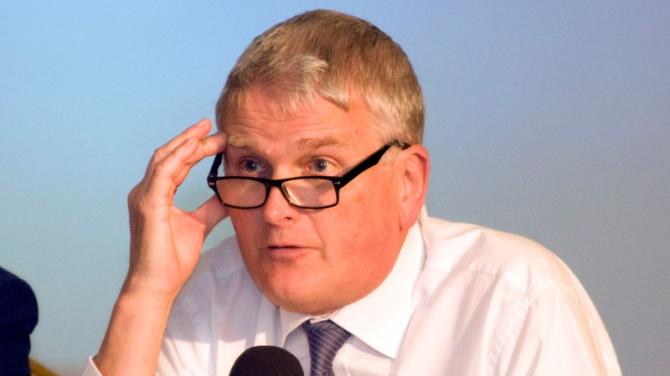 SOUTH Down MLA, Jim Wells, says he would not attend a Down GAA game as the GAA is a “political organisation”.

Mr Wells also said that Down County Secretary, Sean Og McAteer, had ignored his letter as he sought to discuss a number of issues he had with the organisation.

The DUP MLA was speaking on Q Radio with Kevin McAllister following his party leader, Arlene Foster’s attendance at the Ulster Final between Fermanagh and Donegal at Clones.

Asked if he would follow in Mrs Foster's footsteps and attend a Gaelic match, Mr Wells said that the former First Minister had “made it clear after the match that she would not compel anyone to follow her lead,” adding “I'm one of those people who would not have gone”.

He continued: “I have been the MLA for South Down for 24 years, I could paper the walls with the number of invitations I have had to attend various GAA events throughout South Down and I have politely on every occasion declined those options. That will be my policy for the rest of my career.

“The GAA could do very much more to create a shared society. The GAA is a 32-county political movement. Item one of its constitution is the reunification of Ireland. They name trophies after terrorists. If the GAA was simply a sporting event there would be no issue – although I wouldn't have gone on a Sunday to be honest.

“The GAA is much more than a sporting body – it is a body which has political baggage.”

Mr Wells said that he had never met a Protestant who had any interest in the GAA and that, therefore, “it is entirely a sport for the one community”.

“I believe the vast majority of my voters, the unionist voters of South Down, really haven't much time for the GAA because of its political baggage. The political baggage makes it a very dark place for the Protestant community and they need to deal with that before it can be embraced by the entire community.”

Mrs Foster had attended the Ulster Final as the Fermanagh team were her consitutents. But Mr Wells said he had no such inclination to go to a Down game, adding that he had declined an invitation to attend the All-Ireland final between Down and Cork.

“I have no problem with them [Down players] as individuals,” said Mr Wells.

“These are the same clubs who organised Great Escape events in their premises to celebrate the Maze escape which led to the murder of a prison officer.

“They made no apology for the fact and when I wrote to the GAA county board in Down and asked for a response they ignored me. The GAA have got huge strides to make before it’s an acceptable organisation for the Protestant community of South Down and I'm one of those people who wants to see them reaching out to our community and not name their clubs after dead hunger strikers.”

At this point he reiterated his point that he would not be attending GAA games “because of the political baggage of the organisation and also because they don't respect me by responding to the numerous letters I have sent” to the County Secretary, Sean Og McAteer.

“I have written to Mr McAteer about the Great Escape events in his clubs and he hasn't even respected me by giving me a reply. That just shows you the attitude of the GAA to me. I want the GAA to be all-inclusive and drop its political baggage,” Mr Wells added.

The Newry Democrat contacted Mr McAteer and the Down press officer, but at the time of going to press no response had been received.

The South Down MLA, meanwhile, said he would be willing to meet senior figures within the GAA to discuss his feelings.