Poker mum Jenny eyes up showdown... with her husband! 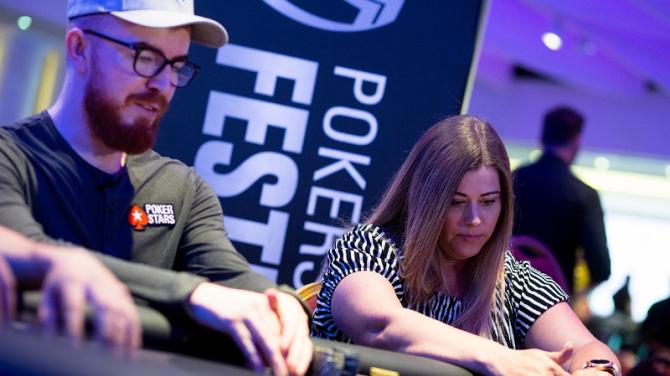 RECENTLY returned from a prestigious poker tournament in Marbella, Newry woman Jenny Steele told the Democrat that one of her poker ambitions is to come face-to-face with her other half at a big event!

Thirty-six-year-old Jenny, a mother of two who runs a small business with her husband called customised.gifts, got into poker from watching him play in local games.

This led to her playing online, and with just a €16.50 stake, she won a prize to play at a pokerstars event in Marbella last month.

This gave Jenny the chance to win a million euros, and although she did not scoop the big pot, she came back with €500 from the trip which was paid for by Pokerstars, as well as with some great experience under her belt.

“Playing in the main event was amazing,” said Jenny.

“I played really well throughout my game but unfortunately I didn't get as far in the tournament as I had planned, but overall it was a great experience.

“I also played in the one of Pokerstars side events; the Marbella cup. The prizes included two packages worth $30,000 to the Bahamas main event in January along with a large sum of money up for grabs, “I made it to day two which meant I was guaranteed money and I ended up cashing for €500.

“My game came to an end when my pocket kings got busted out of the tournament.”

Although you can't beat the actual playing of any game in order to improve, Jenny was also able to pick the brains of some big names away from the tension of the poker tables.

“During my stay in Marbella I met up with Pokerstars Ambassadors Jake Cody and Fatima Moreira De Melo for a coaching session, where they gave me great advice and fantastic tips on how to prepare myself for live events,” continued Jenny.

“Playing up against some of the best was an overall great experience and I feel as if I have come away a better player as I have learned a lot from it.”

Asked for her ultimate aims in poker, Jenny added: “My plan for poker is to take every opportunity to study the game and continually learn to better my game to become a great player.

“I want to build my bankroll and play in online games to qualify for all major events that PokerStars have to offer, like the EPT Barcelona.

“My ultimate goal is to win a major tournament like an EPT and bring home the trophy with a life changing amount of money. My husband is also a poker player so to meet him at a final table at a major event and to get heads up with him would be an amazing achievement (and win)!”