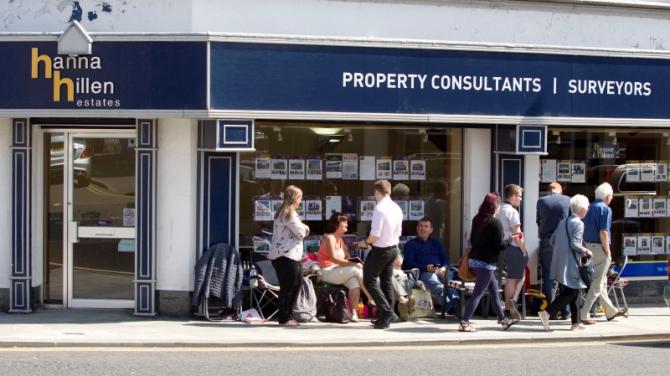 YOU may have been prepared to queue for tickets to see your favourite band from the crack of dawn but would you queue for four days for a house?

Hill Street revellers may have mistaken the queue of people camped outside Hanna Hillen Estate Agents last week for U2 fans dying to get a glimpse of Bono in action.

However, these dedicated prospective homeowners were lining up to get their hands on a lucrative site in Burren's newest development – Belvedere Heights.

The second phase of this much sought after development, which is located on the Clontifleece Road, was released on a first come first served basis at 9am on Friday morning (July 27).

Among the 16 sites that are being built in Belvedere Heights, there is a choice of three bedroom semi-detached homes, townhouses and four bedroom detached homes, and it states in the development's brochure: “This is the perfect location for anyone who wants to enjoy semi-rural, high quality, relaxed living without the loss of convenience to major towns, schools, sports and shopping facilities.”

The Newry Democrat spoke to a few of the six people who had camped outside Hanna Hillen Estate Agents on day three of their camp.

One woman, who was queuing for her son, explained that she was there from last Tuesday morning and was second in the queue as the lady in front of her arrived at 6am the same day.

“It's been lovely weather during the day but it's been cold at night and in the morning time,” she said.

“You don't normally see this sort of thing but it's first come first served and there's only six houses being released in this phase.

Thanking the staff at Hanna Hillen for their hospitality and the PSNI for also looking after them, the woman added: “Hanna's have been very accommodating. They've been coming with biscuits, Shelbourne sandwiches and cups of tea. They've let us use their toilets and charge our phones. They've been great.

“The police have been offering us lifts as well at night so we can use their toilets at the police station and they've offered us cups of tea too.”

One man who also claimed his place in the queue last Tuesday, said he thought the line developed because of the choice of houses on offer in Belvedere Heights.

The Newry Democrat hopes that all those who queued last week found their ideal home!