Shane O'Neill's on brink of promotion 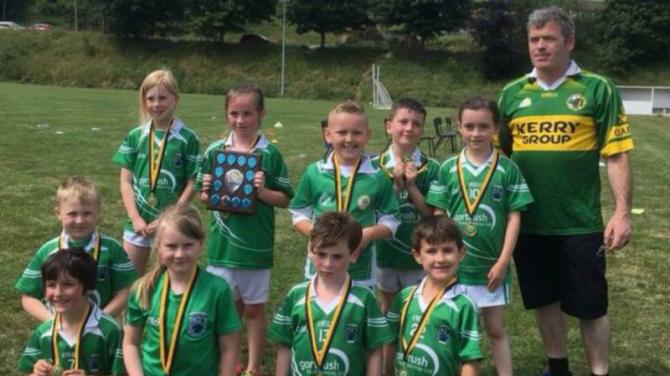 SHANE O’Neill’s are on the brink of promotion to Intermediate League Division 2A following a brilliant twelve-point win over Clomore on Friday night, writes Brendan Osbourne.

Armagh’s Greg McCabe set the Shanes on their way in the opening minutes when he rose highest to fist a great ball from his brother Mark to the back of the Clonmore net.

The home side replied with two pointed frees before two points apiece from Connaire Mackin and Mark McCabe gave the Camlough men a five-point lead, with Clonmore responding with another point from a placed ball.

The Shane’s bossed the rest of the opening half, firing over another four points without reply to lead by eight at the break, 1–8 to 0–3, the scores coming from David McCabe, Mark McCabe, Neil Paul Lennon and a long range free from Connaire Mackin.

Shane O’Neill’s began the second period in similar fashion to end of the first with Connaire Mackin tagging on another pointed free.

The Shane’s led by nine at this stage and further points from David McCabe and Connaire Mackin increased their advantage to eleven before Clonmore registered their fourth point of the game, again from a free-kick. The home side were awarded a penalty soon after which they duly converted and added a further point, this time from play, to trail by just six.

However, this was as good as it got for Clonmore as the Shane’s upped the tempo again and a great team move ended with Greg McCabe slotting home his second goal of the game.

Late points from Ryan Quinn, Paul O’Rourke and Greg McCabe sealed the game for the Shane’s on a very impressive score-line of 2–14 to 1–5.

Despite scoring 2–14, tremendous credit must go to the Shane’s defensive unit who restricted their opponents to just a single point from play, with 1- 4 of their total coming from placed balls.

Next up for the senior men is their final league game of the year at home to Crossmaglen II’s on Wednesday night and Shanes fans are asked to come along and lend the lads your support.