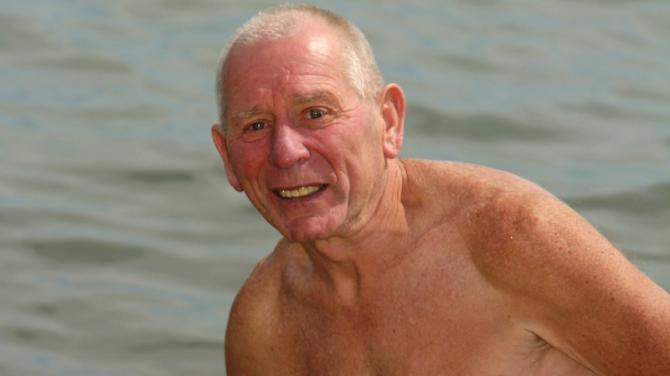 AFTER a narrow brush with death by drowning in Carlingford Lough, Conrad Coffey issued a dire warning to all outdoor swimmers.

The well-known 67-year-old Newry man implored all water users, such as triathletes and long-distance swimmers, who frequent open waters such as the sea or the likes of Camlough Lake: “Please, please always use a flotation device when swimming in deep water. I don’t think I would be alive today if I hadn’t used one.”

A few weeks ago the popular Clanrye Avenue resident was out having his daily dip in Carlingford Lough, between the Warrenpoint Baths and the Gannaway Rock, when he suddenly found his breathing getting extremely laboured. Conrad said it wasn’t a fitness problem as he walks, bikes and swims in the sea all year round but on this occasion he began to struggle badly.

Conrad always takes a floatation device with him when he swims and he takes a whistle too. There was a boat a fair distance away but when he tried to use the whistle he didn’t have the power in his lungs to blow it. He shouted twice but wasn’t heard. It was panic stations then as Conrad said: “I knew I had just one shout left in me and thank God it worked. If the boatman hadn’t heard me the third time, I know I couldn’t have shouted again.”

But the boatman did hear his final cry for help and quickly arrived to help Conrad into his boat. He then took him to shore where two young policemen appeared on the scene. Conrad told them he needed hospital treatment and the policemen told him to sit and try to relax while they phoned an ambulance. It arrived promptly, and after the crew administered oxygen, they took the former Derrybeg man to Daisy Hill Hospital. Doctors there confirmed that Conrad did have a heart problem and he was detained in hospital for two days.

Conrad would like to thank enormously all who contributed to his rescue, the boatman who made the initial rescue (he unfortunately didn’t get his name), the two policemen, the ambulance crews and the doctors and nurses in Daisy Hill Hospital.

Since his brush with death, Conrad has recovered well and is back swimming in Carlingford Lough but now he doesn’t go out of his depth.

He reiterated his warning to everyone who goes swimming in open water, saying: “I have been swimming all year round (yes even in the cold, cold months of December and January) for the past 30 years. I would say I’m quite experienced in open water but still I always take a floatation device with me.

“Thank God for helping me. He gave me a warning and has ensured I will be ready.”

“Over the years there were three other times that I was in trouble in deep water. Thankfully I escaped on all four occasions. But I implore swimmers to think of the dangers out there in the deep. Always use a buoy and check the weather before you go in,” concluded Conrad Coffey.