Keeping busy is the key for goalie Joe (90) 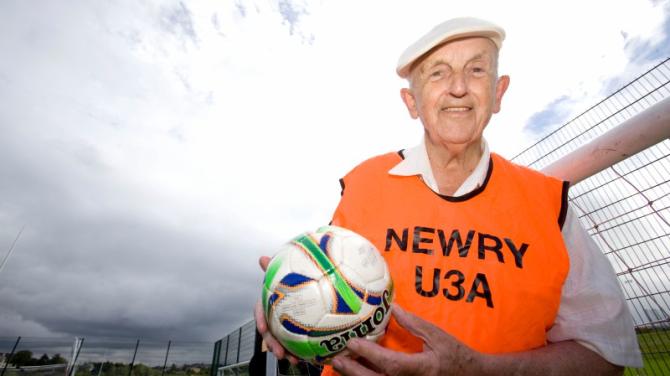 A NEWRY nonogenarian might well be the oldest goalkeeper to be playing the game here.

Joseph Alphonsus Morgan, who turns 91 in three weeks time, plays in goal for the walking footballers of Newry's University of the Third Age (U3A).

That surely makes Joe one of the oldest footballers in the country, if not the oldest.

He's been playing since last June when he and a group of other would-be players began a weekly kickabout at St Colman's College under the tutelage of Patrick Cunningham.

Of course, as the name suggests, walking football is played at a slower pace than your run-of-the-mill game, as Joe explains.

He said: “On our first day Pat took us all into the middle of the field and gave us all the rules. For instance, if you run, it's a foul. If you shoulder anybody it's a foul. If the ball goes over your head it's a foul.

“But I knew the rules and I went up to the goalposts and there was 30 young boys who came in through the side gate and they were all practising on the big field. Their two coaches were right behind them and I heard one coach saying to the other, 'what the hell's going on over there?'.

“I jumped at the chance to play and about 10 others did too and we still have those numbers all the time. We can't get new numbers but we would like to have more players.

“It's very relaxing, it's wonderful. I'm surprised it hasn't caught on here yet because there's a lot of clubs who play it elsewhere.”

What makes Joe's feat even more amazing is the fact that he has never played for a team until now, although he is not the first man in his family to ply his trade between the goalposts.

“In my younger days I was a goalkeeper. I only played at the Abbey and the technical school but I never got into a club,” he said.

“It runs through my family with my daddy (Joseph Pius Morgan) and my uncle, Tom Morgan who were all goalkeepers. And I was a goalkeeper at school and with Gaelic football teams.”

Joe has earned the nickname 'Pat Jennings' from his mates, although in more recent times they have reverted to 'Packie' after Ireland's famous Bonnar – and he enjoys the comparisons to those great shot-stoppers.

“I've great admiration, particularly for Pat Jennings because he's a Newry man born and bred like myself,” added Joe, who says his age has not affected him in any way. “The only thing I can't do now is dive – well I could dive but I couldn't get back up again!”

Of course Newry has history when it comes to producing age-defying goalkeepers. Big Pat was at one stage the oldest player to play in the World Cup when he turned out for Northern Ireland at the 1986 tournament in Mexico at the age of 41.

And then there’s Newry City coach Mickey Keenan, who remains the oldest player to play in the Champions League in 2002 when, at the age of 46 and three months he turned out for Portadown against Belarusian side Belshina Bobruisk. He eventually retired at the age of 48 after joining Lisburn Distillery.

Joe's interest in football stretches back 50 years. A Fulham fan, he grew up cheering on the Craven Cottage outfit and in particular his favourite player, Johnny Haynes.

“He was the first footballer to get £100 a week. Everyone was amazed, they all wanted to know how a club could survive playing that sort of money to a footballer.

“I would watch them on Match of the Day and I'm delighted that they've been promoted back to the Premiership.

“Football has gone crazy now. My son in law, 'Trigger' (Stephen McCoy), is a Liverpool fanatic. They got a goalkeeper for £65m. I can see the difference between now and the 1950s. It was slower and much more laid back then. My God, they're speed machines now!”

Away from football, Joe, who was a painter and decorator by trade, is heavily involved in other U3A activities and enjoys painting and poetry.

“I'm a Patrick Kavanagh man, and I like Yeats and Heaney, but I love Kavanagh, he's my favourite.

“You'll hardly believe this but I joined U3A in 2010 when I was 82 and before then I had never drew a thing in my life. The first thing I did was join the art class and I had a wonderful tutor called Sean Smylie.

“Five years later, in 2015, I had my own exhibition at Newry Library. I just took to it and loved it.”

And as if that wasn't enough talent for one man, he sings as well with U3A's Gentlemen Singers.

“Singing is something I just picked up with U3A,” Joe added. “We're going well and we're getting picking up plenty of bookings in community centres and such like. I can't get over how busy I've been since I turned 82.”

For a man in his 90s Joe is clearly a busy fella and he says that is the secret to his longevity.

“Keeping busy is a wonderful thing. All the boys I went to school with are all gone and I remember fellas that I worked with coming to retirement at 65 and turning into old men over night. I was never like that.

“I was very lucky because I haven't got arthritis. I always keep fairly fit, and I can sleep well and I can lie in bed and learn poetry, getting it into my head and keeping it in there.”

Here's to Joe having many more years between the sticks!