Champ Whyte punches in with support for little Ellen 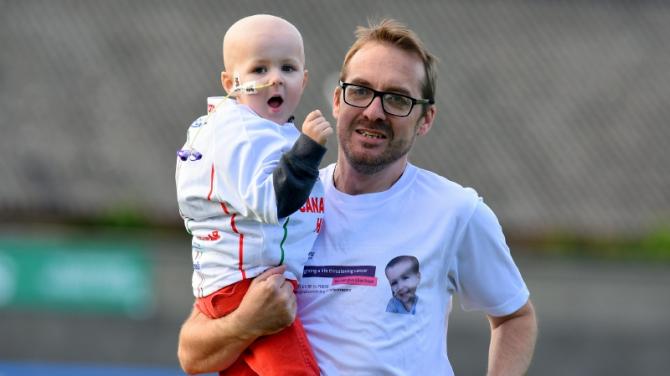 LITTLE Ellen Treanor's dad Paddy has said that the family have been overwhelmed by the wave of support they've received for the brave three-year-old.

This week the youngster undertook a number of kidney tests to check its functionality after the intensive bouts of high-dose chemotherapy treatment she went through.

This week professional boxer Dillan Whyte took to social media to send Ellen a video message to lend his support to the tot, who was diagnosed with stage four high risk neuroblastoma in January.

“I hear you're being very brave. I hear you're fighting a big battle with cancer. I just want to say that I pray to God that you get through this and I'm sure you will.

“Stay strong, keep fighting and you're not alone and my thoughts and prayers are with you and when you're well enough, which I'm sure you will be very soon, there's some tickets ringside for you and your mum for my next fight.”

“For him to take a bit of personal time and effort to send a message, it was a nice thought and a nice gesture,” said dad Paddy.

“On the back of the fundraising, the support from the whole community - whether it's prayers, get wells, or Facebook messages - has given us a good lift. All the wee things that the community are doing is a real boost and definitely gives us a great lift.”

The sporting community in particular has weighed in behind Ellen. On Friday night she was the mascot as Newry City AFC played their first home game in the Danske Bank Premiership.

She proved to be a lucky mascot too, with City winning 2-1 against Dungannon Swifts.

The toddler's father is hopeful that the medics will give the go-ahead for Ellen to undergo radiotherapy treatment after a short period of convalescence.

Paddy said: “We were up at the clinic on Thursday for a kidney function test, then it's two weeks of sitting about the house and waiting before she's a full round of tests before the end of August.”

For Thursday's GFR test on her kidneys, a line was inserted into Ellen's hand, which then injected solution into her body. Her bloods were taken two hours later, and subsequently every 40 minutes after this for a further three hours to try and determine the overall condition of Ellen's kidneys after the chemotherapy treatment.

Paddy continued, “The tumour is wrapped around one of the arteries beside one of the kidneys. The kidney function before the last round of high-dose chemo was just borderline.

“They told us that if it's doing something then it's better than doing nothing, so they just tested it again after the high dose and are hoping that it's still functioning. It's weighing up the pros against the cons.”

Speaking of the fundraising campaign working towards reaching their target of upwards of half a million pounds for clinical trial treatment in the US, Paddy said: “We're confident we can get there but we need to keep plodding on. It's tough enough for us I can only sort of imagine what it's been like for Ellen.

“On her last set of scans her bones and bone marrow was clear, so if there's evidence of disease back in the bone bones or bone marrow, she might need another three doses of chemotherapy, though hopefully, if it's still clear, they'll go ahead with radiotherapy which will hopefully reduce the tumour in her abdomen and blast the end of it.”