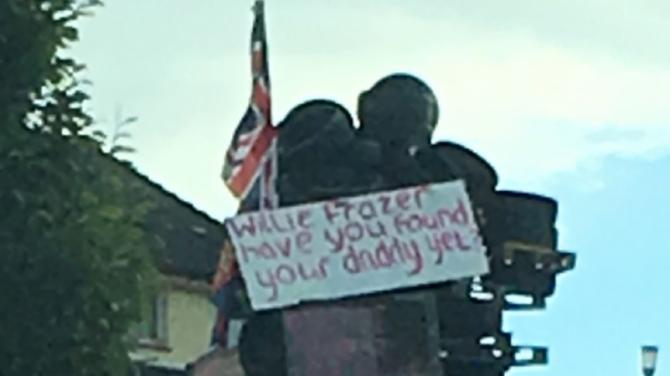 THE son of a murdered UDR man from Dungormley has condemned those who placed a sign referring to his father's killing on an internment bonfire in Parkhead last Thursday night (August 8).

Robert Frazer was shot dead by the IRA in August, 1975 as he reversed his car out of a farm at Ballymoyer near Whitecross.

His son, prominent loyalist and victims campaigner Willie Frazer, described those who placed the sign on the bonfire as “mindless, uneducated, entrenched individuals.”

“These people are unwilling to move forward; their only aim is to provoke and spread their hate filled agenda,” said Mr Frazer.

“I am well used to this type of mindless bigotry as are the families of the victims we represent, daily we take abuse, be it over the phone or in the street.

“These people have no history, no culture, nothing to be proud of, so they cling on to he glorification of murder. It's more to be pitied.

“Those who wish to blacken my father's name are doing so to justify their own sectarian agenda. My father, like many others served the community with pride, enforcing law and order. Republicans seek to rewrite the past to facilitate acceptance of their campaign.”

The placing of the placard was also roundly condemned by political representatives from the area.

“Such actions are hate crimes and must be eradicated. This so called anti-interment bonfire has nothing whatsoever to do with the legacy of internment.

“It is anti-republican, and does not celebrate any aspect of Irish national identity or cultural traditions. Those responsible are under no circumstances acting in the name of republicanism.”

SDLP MLA Justin McNulty added: “Those responsible should be ashamed of themselves. In 2018 there can be no tolerance for such hate in our society.

“The SDLP's message is clear, these actions do not reflect the true meaning of what it means to be an Irish Republican, and I hope they are widely condemned.”

Meanwhile, Ulster Unionist Councillor David Taylor said that a “multitude of hate crimes have been committed by the organisers of the internment bonfire.

“Items placed on the bonfire reference victims campaigner William Frazer and his late father Bertie Frazer, who was murdered by the IRA,” said Mr Taylor.

“Other items direct highly offensive remarks towards HM The Queen and the RUC. The Frazer family have suffered greatly at the evil hands of Republicanism terrorism and it is completely unacceptable that they should have to tolerate this despicable behaviour.

“These actions highlight that a sinister and threatening mindset continues to prevail within Republicanism and the bonfire organisers should be roundly condemned across the political spectrum. I have reported this matter to the PSNI.”

Newry & Armagh DUP MLA William Irwin has spoken of his disgust at incident.

“Once again Republicans in Newry have stooped to a new low in mocking the callous and brutal murder of an innocent man who was simply going about his daily business earning a living for his family and trying to do the best for the whole community.

“This is not the first time this has happened in this area and speaks volumes about the type of depraved people organising this Republican bonfire at Parkhead in Newry.

“Following on from the desecration of the poppy wreaths at the Cenotaph in Newry and Narrow Water and the recent attack on the Kingsmill Memorial it’s clear that a section of the Newry community are hell bent on creating as much tension as possible and injecting as much hate and bile into the area as they can possibly muster.

“This sick and mindless placard mocking William Frazer and his family must be condemned from all quarters and promptly investigated for what it is – a sickening hate crime which does nothing but create further tension in the community.

“Talk of equality and rights by Republicans around Newry is lost on their Unionist neighbours who have recently witnessed attack after attack in this area.

“I have spoken with William Frazer and assured him of my full support at this difficult time. His relentless pursuit of justice for innocent victims is obviously hurting some Republicans who feel they must retaliate in the most vile manner possible.”