Public 'will not put up' with search measures 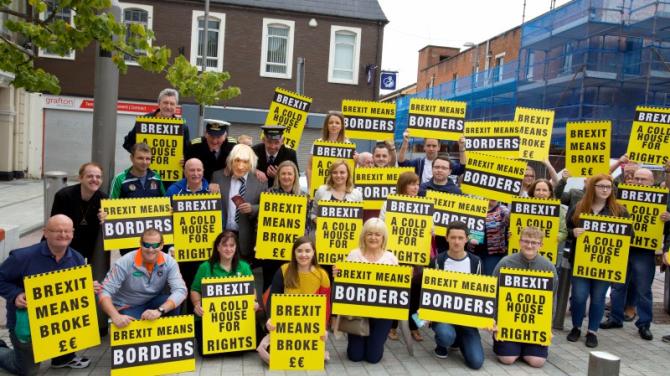 NEWRY and Armagh MP, Mickey Brady, says people “will not put up” with stop and search zones within a mile of the border.

Last week it was reported that the Home Office is planning to set up zones across the Northern Ireland border.

Critics say that this would lead to the “hardest of hard borders” after Brexit.

A Counter Terrorism and Border Security Bill would introduce the anti-terror checks “within one mile of the Northern Ireland land border,” including train stations connecting the north and south.

Under the proposals, police and border officials could “stop, search and detain” any person near the northern side of the border suspected of planning “hostile activity.”

Speaking at an anti-Brexit rally in Newry's Margaret Square, organised by Ógra Shinn Féin Newry, Mr Brady said that those living along the border would not stand for this.

The rally featured a Boris Johnston lookalike being stopped by customs and having his car searched.

His comments were supported by the party's Louth councillor, Ruairí Ó Murchú, who will replace former party President, Gerry Adams, as a nominee for election to the Dáil.

“Is it a case that me, and the people who came down in the car with me from Dundalk are going to show passports at the train station, or in this one mile security zone or whatever it is they're talking about?” he asked.

“The reality is that a hard border is unacceptable in these parts. It is not acceptable that there would be a one mile security zone where people would be stopped, searched and possibly detained. It is not OK that I would be asked for a passport in and around these places.

“The only solution that we can see as this hard Tory Brexit comes down the line, is a special designated status, and even beyond that it's an Irish unity referendum and it's a conversation about a real, and new, and agreed united Ireland.”

Mr Brady told those in attendance Theresa May's battle with Brexiteers within her own party is something which various Conservative leaders have faced since the UK joined the EU.

“What we want is a 32 county socialist republic where we are masters of our own destiny. We won't have to worry about Leo and Theresa or any of the rest of them.

“What we want is the implementation of the Good Friday Agreement in all of its parts and I say again, we will not be collateral damage for the British, Irish Government or anyone else as far as Brexit is concerned.”