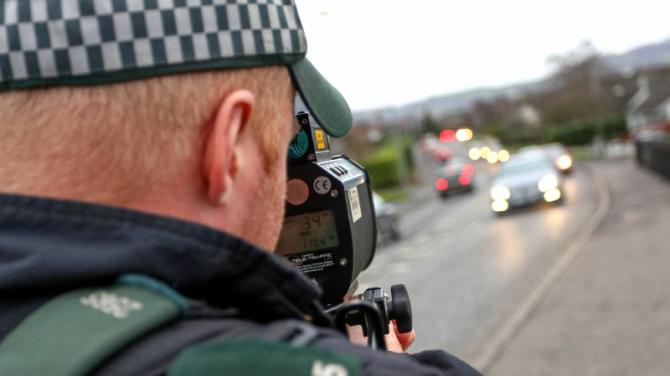 THREE roads in the district have made it into the top 10 of speeding hotspots in Northern Ireland.

The Dublin Road in Newry, which was number four on the list, had 704 speeders detected by mobile cameras in 2017, while the Newry Road in Warrenpoint had 455 and the A25 Newry to Beleek had 338.

In total, 31,076 speeding offences were detected across the country last year.

The figures were obtained from the Northern Ireland Road Safety Partnership.

“While we welcome this report, it is difficult to accept these statistics as a success,” she said.

“Despite the downward trend of fewer people being killed on our roads over the last 10 years, inappropriate speed for the conditions is still consistently one of the main causes of the most serious collisions in which people are killed and seriously injured.

“Removing excess speed from the road safety equation should be the easiest thing that every road user can do.

“Road safety is and will continue to be a key priority for the safety camera partnership and police. It should be everyone's priority.

“Whether as a driver, a motorcyclist, a pedestrian or a cyclist, we all share the roads and the responsibility for road safety.”

Joshua Harris, director of campaigns at road safety charity Brake, said penalties for speeding need to be toughened up.

“There is no excuse for speeding, it is a selfish act which endangers lives and the figures in Northern Ireland are cause for concern,” he said.

“We work closely with the victims of road crashes and sees first-hand the devastation they cause to individuals, families and whole communities.

“Brake urges greater investment in roads policing and stricter enforcement - there should be an expectation on the roads that if you break the law, you will be caught and penalised.”

In 2017 there were almost three times the number of detections in Northern Ireland in 2017 compared with 2004.

The main reason for this increase was the reduction in the threshold at which a driver can be detected speeding.