Patrick Street residents fight to 'save our wall' 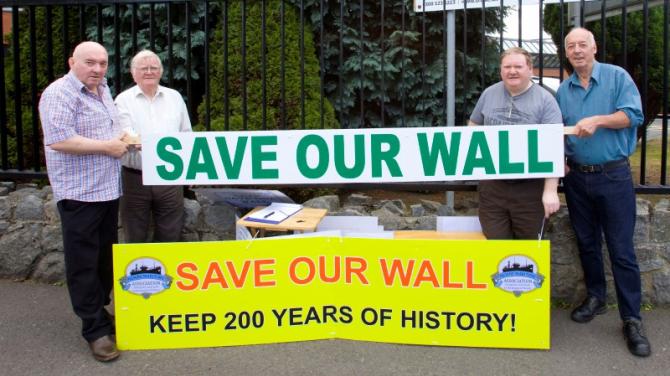 A RESIDENT of James Connolly Park has told the Democrat of his opposition to the proposed removal of the remaining portion of a 19th century wall at the Southern Regional College.

The wall is at the boundary between the college and Patrick Street. Some of it was removed when the college was originally built.

The reason given for the proposal, in a letter to residents, is that it will “open up the building to be more visible to the public” and that it will highlight the range of facilities and courses being offered.

The letter adds that the wall will be removed to ground level and matched to the existing footpath with an ash felt coating.

Street bollards will then mark the boundary line and provide security from cars driving over the public footpath.

It is further proposed that there will be no change to the vehicular entrance and that the site will be secured using removable bollards.

Mr Paul Hughes said: “This is a 200-year-old wall and it's purely for cosmetic purposes. There's no reason on earth for it to be moved. It's going to affect the character of the whole area.

Continued from page one

“The wall has been beautifully built. I have been told that the stones are here from 1820. I think it's all to do with making it a university. If that wall was around a university in Cambridge or Oxford, there's no way they would knock it down

“The corporate body that runs the college, when it was built they wanted to knock it down and the locals all got together and kicked up about it and stopped it.”

Mr Hughes outlined what he sees as some of the main issues to be considered if the wall is to be demolished.

“There's going to be a safety issue,” he insisted.

“They're going to leave it open it and stick bollards in at night. At present there's only two entrances onto to the street, so you're going to have a safety issue of kids streaming out onto the street all the way up the entire length of the college.

“You're going to have road safety issues; are they going to build another set of traffic lights, in which case it's a total bottleneck this area of town as it is.

“They have reared their kids and they want a bit of peace.”

A petition has now been started by those fighting against the wall’s demolition and can be signed outside the gates of the SRC.

As for the reasons given for removing the wall; making the college more visible and advertising its facilities, Mr Hughes added: “If behind that wall was the Taj Mahal, I would be out to knock it down myself. It is the ugliest building ever.

“There are plenty of railings if they want to advertise courses, like they've done with the outside now. They could attach all the advertising they want – there is 30 or 40 feet of railings.

“This is our history, it offers a link back to this cattle market and feed market that previously occupied the site. Therefore the wall is of great local, historical, and cultural importance.”

The Newry Democrat contacted the Southern Regional College for a response but they did not respond at the time of going to print.