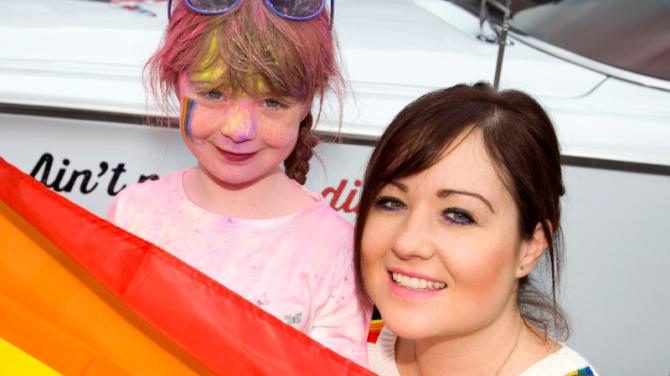 NEWRY Rainbow Chairperson Rory Rafferty said that Pride is “needed more than ever” as he reflected on another successful year for the LGBT parade.

Mr Rafferty said that whilst last week's festival was a fantastic event and a cause for celebration, it shouldn't be forgotten that its whole purpose is about achieving equality for the LGBT community in Northern Ireland, which he feels is still some way off being achieved.

“We've come a long way but there's still a long way to go and a lot of the discrimination is hidden - you're not going to see it on Pride day,” he said. “Pride's not about showing discrimination, it's about demanding rights.

“Northern Ireland is still one of the most homophobic places in Western Europe. That's a big problem and that's why Pride is needed and it's needed here more than anywhere.

“There are no laws really to protect us specifically and directly and when there's no government there's really no chance of getting those laws in the forseeable future - it's embarrassing actually.

Mr Rafferty said that the event was the culmination of a lot of hard work from a lot of people who volunteer and give up their time freely.

“It was absolutely class, the weather was fabulous and the numbers of people that turned up was very encouraging, it's grown considerably in the past couple of years,” he continued.

“The parade was huge, the sound and the colour was just brilliant.

“Newry is the only Pride in the North, of three, that doesn't have a protest, which is remarkable in many ways.

“It is good that there's no protests, it's a very positive day and most, if not all of the people are there for the right reasons. I think Newry's a very tolerant place, it's a fantastic place to live.

Sinn Féin MLA Megan Fearon said Pride is a display of “unity and determination” in the fight to achieve full equality for the LGBTQ citizens across the island.

The party’s equality spokesperson said: “We still have a long way to go before reaching full equality and it’s important to remember that Pride is first and foremost a protest and a fantastic platform to raise awareness.”

Meanwhile, Slieve Gullion's SDLP councillor Pete Byrne has praised the Newry Rainbow Community for this year's successful Pride in Newry festival and has called for greater understanding and acceptance for the LGBT community.

“While the fight continues for equality under the law, we all have a responsibility to ensure the inclusion of our LGBT brothers and sisters in society whether it be in our homes, schools or workplaces,” he said.

“People have always shown to be ahead of our politicians, let’s not wait for them to catch up, let’s continue to deliver a message of hope and acceptance in all of our communities.”