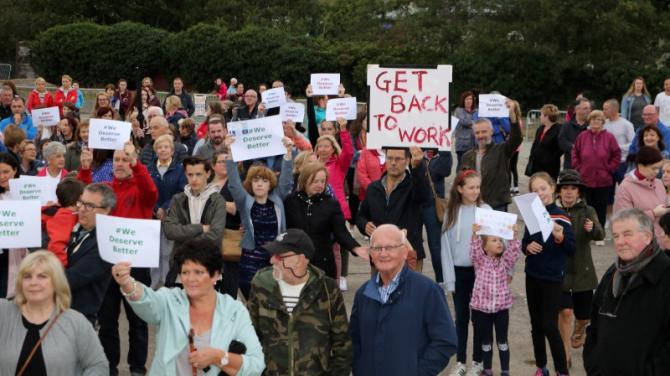 AN ALBERT Basin rally staged in protest last Tuesday at the near 600-day political deadlock at Stormont was hailed as a resounding success by its organisers.

The 'We Deserve Better' movement staged rallies all over Northern Ireland last Tuesday, which coincided with the day the North surpassed Belgium's record of 589 days without an elected government in 2011.

Bronagh McAtasnay, of 'We Deserve Better Newry' said the movement has started to gain traction amongst the hearts and minds of a public increasingly disenchanted with their elected representatives.

“We are really, really pleased with it,” she said. “The head count was probably about 350 at it which was very good for Newry. The feedback was very, very positive.”

One of the main issues which the event focused on was that of MLA's receiving full salaries whilst the administration is in lockdown.

An incredulous Bronagh said: “You wouldn't get paid and you'd be looking for another job. There's been lots of feedback about the lack of infrastructure, its more than just cuts, it's the frustration that things are sitting on desks in Stormont and not being touched for this length of time.

“One of the things we plan is just to contact MLA's on a personal basis – respectfully - and just ask them what they're doing, so we're hoping to get that next part of it moving.

“The overall movement is planning to set up a petition of some kind just to keep momentum going.”

Bronagh said that the turnout for the demonstration has confounded critics who believed that the protest movement would slowly subside.

“We were told in Newry that nobody would come, that there wasn't the will for it, but I think that's been proved wrong.

“I think that if we go and do something again that we'll get an even greater support, combined with the support in Warrenpoint, which had a great turnout as well.

“There's certain political footballs that's getting kicked about left, right and centre and the day-to-day stuff that's not glamorous.

“It's not the headline stuff that they want to do, but that's what affects us: if our roads are safe and if our children are getting a proper education. There isn't a hierarchy of issues, everyone has needs that need to be addressed.”

Ms McAtasnay believes the public are jaded with the orange and green political tramlines of old, and said that a new, refreshed, progressive and invigorated form of politicking is what's required from all parties for the good of the whole country.

“We feel that the will is there and that there are a lot of people disillusioned with this orange/green debate that's constantly going on.

“We have had people involved with the campaign who've had deaths in the family due to road accidents and really feel that the neglect on the infrastructure, the basic infrastructure in Northern Ireland is actually impacting on lives in a really horrible way.”

Bronagh feels that the 'We Deserve Better' movement is a clarion call from ordinary people who are demanding representation from the politicians they've voted for.

“We'd a lot of elderly there who are very , very neglected in our daily politicking. We've certainly rattled a few cages because we're not aligned to anything. We're just ordinary people.”

The current impasse isn't tenable in perpetuity, Bronagh added, and feels that some form of intervention from Westminster may be the only option at some point.

“If they're not going to lead themselves then they need someone to lead for them and we've called for an independent facilitator as well.

“I honestly don't think that this is what people voted for,” she said.