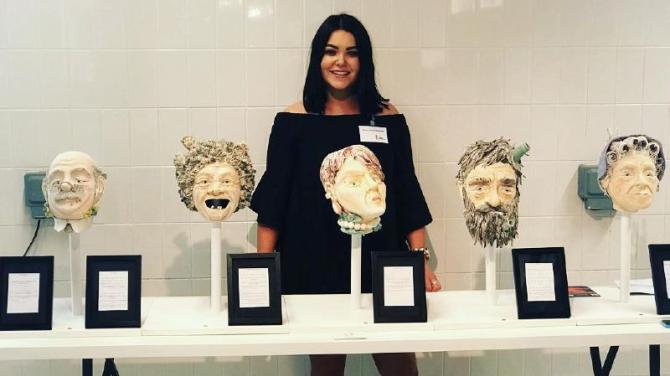 SCULPTURAL artist Aimée Marie McGovern was in jubilant form speaking to the Newry Democrat after she scooped two prestigious art awards for her ethereal and evocative 'Kindred' ceramic exhibition.

The 22-year-old's collection of familial themed ceramic sculptures, in which she infused age-old archetypes with her own poetic imagery and unique characterisation, saw her win both the ArtisAnn Gallery Award and The Royal Ulster Academy award for emerging artist.

Speaking to The Democrat ahead of her 'Kindred' exhibition opening at the ArtisAnn Gallery for its September 5-29 run, Aimée told me of the sense of vindication she feels at winning an award that's decreed by her fellow artists.

“The collection is called 'Kindred' and I think it was a good name for the project because I wanted a project that would relate to everybody,” she said.

“I'm so lucky because, as an artist, it's so hard to get yourself known straight after uni, it's a really daunting experience, so have those two awards is just fantastic. It's given me a really good stepping stone and a lot of confidence, actually.

“It's good because it was the first time that somebody else, outside of university or my family, viewed my work, so to get good feedback was great because not everyone is going to like your work.”

Describing the themes and concept of her exhibition, Aimée said that she wanted a tangible element of audience interactivity in her work that would evoke a resonance and an affinity with her pieces.

“I am a sculptural artist, transferring my own poetry into imaginative, narrative sculptures that provoke a sense of visual excitement and a humorous reaction,” said Aimée

“Each piece not only offers the viewers the opportunity to get emotionally involved, but also allows them to create their own identity for the character in relation to their own family life and memories.”

“When I went to do my GCSE's we had a small kiln in the room and nobody really did nay ceramics. I would be asking my teacher: 'Miss, what's that?' and; 'How do you do that?', so that's really where it started from.

“It wasn't really a question of what I was going to do, it was always going to be ceramics. I would call myself a sculptor who specialises in ceramics.”

Describing the methodology she applies to the process of turning a lump of clay into a visceral, cogent idea, Aimée said: “I would use different types of clay; groggy clay, porcelain and paper clay and stuff, so working from really rugged kinds of clays all the whole way up to really delicate, really fragile and easily broken types of clay.

“It's not really daunting, it's exciting because you're starting off with literally a blob and at the end, you look at what you've made and you can't believe that you've made it,” she said

Ethereal evocations of warm childhood memories with her own unique twist informed Aimée's collection, and she's justifiably delighted with the final result, and the richly deserved commendations that she accrued as a result of her work, saying: “I knew that I wanted to do faces, or some kind of sculptural, figurative work and I was trying to think how to relate to everybody and how could i capture memories and make the audience think: 'Oh my God, that's my family she's talking about'.”