Wall protests to stop to allow SRC some 'breathing space' 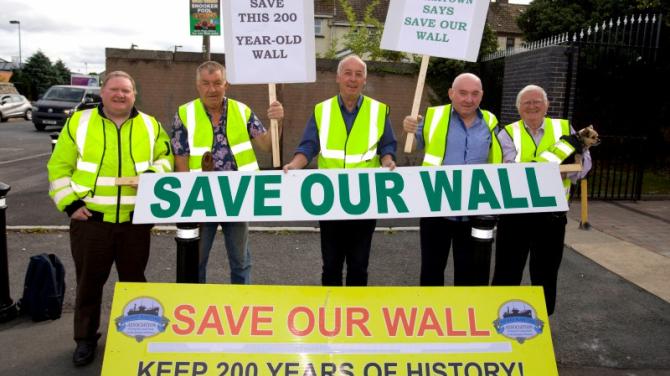 A PRODUCTIVE meeting has taken place between the Southern Regional College (SRC) and Newry Maritime Association (NMA) regarding the proposed demolition of an historic wall by the college.

The wall is at the boundary between the SRC and Patrick Street and formed part of the old cattle and pig market.

The college's proposal to take down the wall has resulted in widespread opposition among residents, political representatives and groups such as the NMA, who are fearful that another section of Newry's historic past will be lost. There are also concerns that taking away the wall will result in an increase in anti-social behaviour in the area.

For their part, the SRC have said that taking the wall away will open up the college so that it is more visible to the public, and that it will highlight the range of facilities and courses being offered.

Mr James McArevey from NMA, together with others met with the Chief Executive of SRC Mr Brian Doran, and told us that the meeting was “balanced and constructive”.

“We made our points, we put across a strong, very robust case as to why the wall should remain,” said Mr McArevey.

“We also told them that we were very annoyed, and the community was very annoyed at the way that the thing had been done. There had been no consultation etc, and the college admitted that mistakes had been made.

“But they said: 'give us a chance and we'll rectify it'. They took all our comments on board and said that they fully understood where we were coming from. They also gave us a full explanation as to why they want to take the wall down as part and parcel of their coming expansion. They put their case very well, I have to say.”

Mr McArevey said that the college representatives appeared to be taken aback by the level of opposition their plans had provoked, but asked that they be given a little breathing space so that they could consider all the information they had received.

They also asked that all protests stop so that they could do this. Mr McArevey said that this was readily agreed to, but only on the understanding that they would come back to the NMA and others before close of business on Friday, September 14. The SRC have agreed to this also.

“We also informed them that if there is not a satisfactory outcome by Friday, not only will the protest begin again, but it will escalated.”

That said, the meeting was also described as “amiable” and Mr McArevey added: “I was very clear with him (Mr Doran) to say that we are so proud that the Southern College is headquartered in Newry and more significantly that a Newry man, born and reared, heads it up as Chief Executive. We are very proud of that. And we're also more than pleased to hear about the expansion plans.

“But at the end of the day, these things can only be done in consultation and in tandem with the local community of which he is a neighbour”.