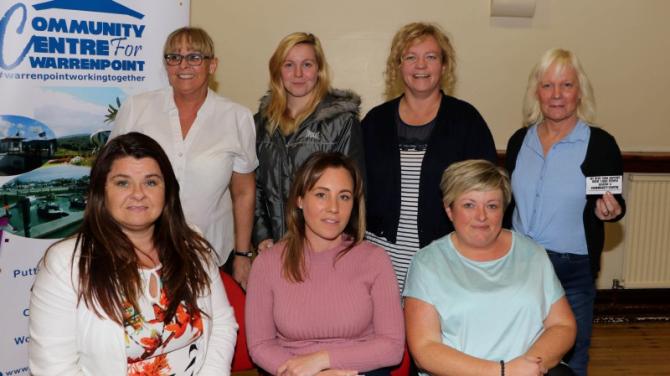 THE treasurer of the Community Centre for Warrenpoint group believes that the project is one step closer after a “very positive” public meeting with council representatives on Wednesday.

A site in Clonallon Park in the town has been suggested as a possible location for the much campaigned-for facility.

Barbara McGinn said that the meeting at Warrenpoint Town Hall between the group and Colm Bradley, a consultant appointed by the Newry, Mourne and Down Council (NMDC) to conduct a feasibility study on the viability of the proposed development, was extremely encouraging.

She added that she felt that Mr Bradley had genuinely engaged with the group and members of the public.

“Colm Bradley's going away to change a few different things and see if it's viable, so hopefully [it is],” she said.

“It definitely was very positive. He took on everyone's comments and he said that he was going to go back to the architect to look at different things. He made a lot of notes and is going to ask a lot of questions.

“It was pretty good, it was good to see so many people interested in it. There were more people there than I expected as most of the seats were full.

“We were positive with all the different comments that people were feeding back and the questions that were being asked.”

Ms McGinn said that the group left the meeting feeling buoyed by what was discussed between themselves, Mr Bradley and members of the public who attended to offer their input.

“We're more confident than we were this time last year. We feel a lot more positive and the council are working with us. We remain very, very hopeful [of the centre getting the go ahead]. It's looking like Clonallon Park is the most likely location.”

Barbara lamented on the absence of a community centre in the town since the T'ir na nÓg centre was burned down some years ago, saying that it has left a vacuum socially in the area

“It was a big loss to the community. Our ultimate aim is getting somewhere in the town for young people to go to, but it's not solely for young ones. We'll have stuff for all different age groups, but our main focus point is on a youth group for them to be able to increase their numbers.

“We want to be able to stamp out the anti-social behaviour, get those carrying it out off the streets and give them something to do.”

Barbara said that anti-social behaviour had increased in the town in recent years.

“We've been having different reports from different members of the public who live in various parts of the town,” she said.

“People are telling us that they want to get the kids something to do because if you're not into sports, if you're not affiliated to the GAA or a soccer club or something sporty, there's not much else in the town.

“So we want the community centre to be accessible to everyone, regardless of creed, not solely for sports, and it's going to be brilliant. It's going to be super!” enthused Barbara.