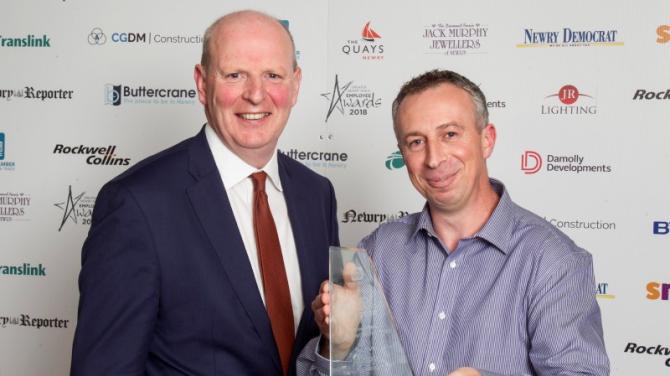 NEWRY'S top employees were celebrated at the Greater Newry Area’s inaugural business employee awards in the city on Saturday evening.

Hosted by Newry Chamber of Commerce & Trade, more than 200 employees from across the region attended the glittering awards ceremony in the Canal Court Hotel.

Ten employees and one team won the top awards on the night with the Overall Employee of the Year award, sponsored by the Newry Democrat, going to Vladimir Mishurov from Deli Lites Ireland. The Team of the Year went to Kilkeel based Rockwell Collins.

A further five teams and 29 employees from businesses and organisations across the Greater Newry area received commendations on the night for their achievements, including the Newry Democrat's Sports Editor, Steve Malone who won the Creative, Media, Digital or Technology award.

Speaking at the awards ceremony, Paul Convery, President of Newry Chamber of Commerce & Trade said the evening was “an opportunity for public recognition of the outstanding performance that employees deliver every day”.

He added: “This is Newry Chamber of Commerce and Trade’s first ever employee awards ceremony and the interest in the awards has far exceeded our expectations.”

Highlighting the value of a public recognition event for employees, Mr. Convery said: “[The] evening is not just about the individual winners, it is also about highlighting the importance of every employee to business and organisational success. The fact that we are having an employee awards ceremony sends out a very strong message about the importance of employees to business success.”

Commenting on the success of the event, Chief Executive of the Chamber, Colm Shannon said: “With more than 60 nominations for the awards and over 200 employees from businesses and organisations across the Newry area turning out for the ceremony, the awards scheme has been a great success.

It is not just the success on the night but the quality of the nominations which has been so impressive. It says so much about the skills, talent and commitment of people working in the Greater Newry area.”

Michael Scott, Editor of the Newry Democrat, sponsors of the overall award, added: “I would like say a big well done to all of the winners, but especially to Vladimir and our very own Steve Malone on their success.

“Steve is a hugely popular and hard-working member of our team and thoroughly deserving of his award. We are all extremely proud of him!”

Hosted by the BBC’s Mark Simpson, the event was attended by some of Newry’s top businesses

The awards were judged independently and cover a broad range of businesses and organisations across 11 different categories. Each award has been individually sponsored.