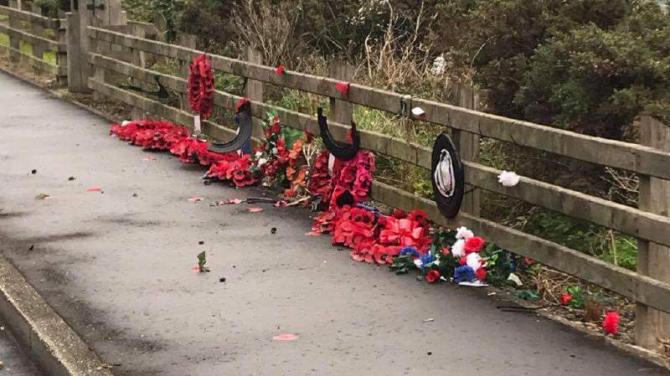 A WARRENPOINT councillor has described the scene as a group of alleged Cliftonville supporters wrecked the Narrow Water memorial on Saturday.

Cllr Jarlath Tinnelly says he saw “three or four men ripping at the Poppy wreaths” as he was travelling past the memorial around 5.15pm.

The incident has been condemned by Cliftonville, who had been playing Warrenpoint Town that afternoon, and by politicians, some of whom have said that the club should ban those involved.

Cllr Tinnelly said he saw those involved ripping the wreaths off, “kicking them around as if they were playing about with them in the school yard”.

“The most shocking thing of the whole lot was the brazenness of it. On a Saturday afternoon and the amount of traffic going past and the perpetrators absolutely unconcerned about who was watching them and who was seeing this going on.

“I condemn that in the strongest possible terms. That level of intolerance and disrespect in normal society in 2018 is just unacceptable.

“I know those sentiments would also be shared by the vast, vast majority of people throughout South Down and the whole district no doubt.

“For a group of grown men to take a conscientious decision to do something like that – it just beggars belief.”

The independent councillor on Newry, Mourne and Down District Council added: “The other thing I found shocking was one of the guys that was with me was fairly certain he saw a man standing holding a child in his arms, so it looks like there were young children on that bus as well.”

The memorial was repaired and reinstated on Sunday morning.

For their part, Cliftonville Football Club said they would co-operate with the police and that those involved are not in an affiliated supporters group or Supporters Club.

Reds Chairman Gerard Lawlor stated: “I totally condemn any act of desecration. We live in a sad society where anyone would get a kick out of desecrating a memorial.

“If anyone connected with our Club has any information about the incident then they should report it to the PSNI.

“This pathetic act isn’t in my name nor that of Cliftonville Football Club.”

South Down DUP MLA, Jim Wells, congratulated the Police for their response. He also called for those involved to be banned by Cliftonville.

“The IFA and Irish League clubs have made huge efforts to drive sectarianism out of the sport in Northern Ireland. Cliftonville now have an opportunity to make it clear that the Club won't tolerate this type of behaviour.

“They don't need to wait for the outcome of the Police investigation. The supporters who were responsible for yesterday's disgraceful incident must be banned immediately from attending all future Irish League matches.”

The sentiment was echoed by UUP councillor David Taylor, who said he was struggling for words strong enough to condemn the incident.

“Their attack on this memorial is deplorable. They have vandalised poppy wreaths and destroyed messages left in memory of those who were murdered at Narrow Water.

“These so called football fans are the lowest of the low and are intent on causing more pain for the families of the victims. They are vile and disgusting individuals who have brought shame on the football club which they claim to support. They must not be allowed to get away with this.

“I would expect to see prompt and robust action from the PSNI in pursuing the criminals responsible to bring them before the courts.

Sinn Féin MLA Sinead Ennis condemed the incident, adding there was no place in society for such acts.

"Monuments and memorials are important places in communities and should be respected,” she said.

DUP Newry and Armagh MLA William Irwin said: “This memorial has been repeatedly attacked with wreaths smashed to pieces and scattered over the road way regularly.

“It is a very cold and callous act for anyone to carry out and is indeed an act of pure hatred, especially so when it is considered how brutally the members of the British Army were murdered at this site by the IRA and what the memorial means to the families and friends of the murdered soldiers. It is also all the more sickening as it is only a few weeks since a memorial service was held at the site and these new wreaths were placed.”

This is an absolute affront on our peace process and such behaviour has no place in our society,” she said.

“It is disheartening that 20 years after the Good Friday Agreement, episodes of this remind us of how far we have to travel to end sectarianism in our society.”