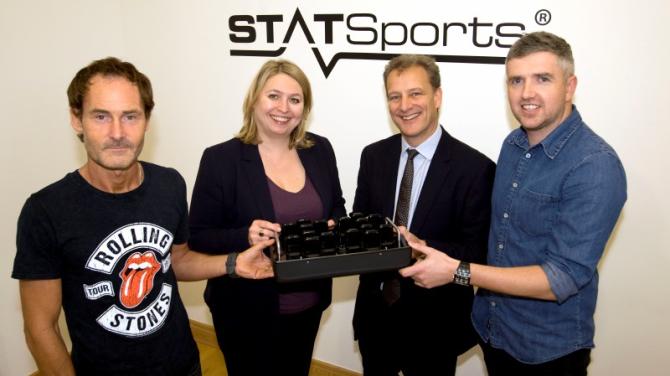 IN what is surely one of the largest jobs boosts seen in this area in quite some time, Newry firm STATSports has announced the creation of 237 new jobs over the next three years.

The jobs announced yesterday (Monday) are part of their aggressive growth plans to build on its global success.

They are also making a multi-million pound investment in R&D and staff training supported by Invest Northern Ireland.

STATSports is the world-leading provider of wearable player tracking devices and analysis software with offices also in Ireland, London, Chicago and Florida. It has recently launched its Apex Athlete Series, which expands the company’s reach into the consumer performance monitoring market.

Alan Clarke, CEO and Co-Founder of STATSports, said this is is a hugely exciting time for the firm as they embark on the next stage of their journey.

“We have already established our performance monitoring technology with some of the biggest and best known sporting organisations in the world and this investment will allow us to expand our reach even further in both the elite and everyday field sports sector,”

“Our staff are highly skilled and incredibly knowledgeable about the sports performance monitoring industry and we will be replicating that with the additional hires. The R&D assistance will also allow us to keep evolving our cutting-edge technology.”

The announcement was welcomed by the Secretary of State for Northern Ireland, Karen Bradley MP.

“I am delighted to support the announcement of 211 new jobs in Newry, which will generate over £7 million annually in additional salaries,” she said.

“STATSports is an award winning tech business which has a fast-growing reach across the world and an outstanding reputation as a leading pioneer of cutting-edge sport technology.

“It is fantastic to see a significant R&D investment of £5.5m which will also create 26 R&D roles for the business.

“This is brilliant news for Newry and Northern Ireland as a whole. Once again, local businesses are making a huge impact on a global scale, with exceptional talent and world-class innovation.”

Invest NI’s Executive Director of Business and Sector Development, Jeremy Fitch added: “This significant expansion to STATSports workforce is an aggressive move to break into new markets and increase sales in Europe, the US, Asia and South America.

“Invest NI is proud and delighted to be supporting such an innovative and fast moving company to scale so significantly, securing this major investment in the Newry, Mourne and Down District Council area.”

Invest NI has offered STATSports almost £4million towards its investments in job creation, R&D and staff training. Recruitment is well underway in Newry with 92 of the new roles already in place. The jobs include a range of roles in HR, Sports Science, Sales, R&D, Finance and marketing.

Alan Clarke continued: “I would like to thank Invest Northern Ireland for its invaluable support in helping propel our business to the next stage of its development. Its willingness to understand the company and align support with our plans has been crucial to our growth and will enable us to expand the business here in Newry.”