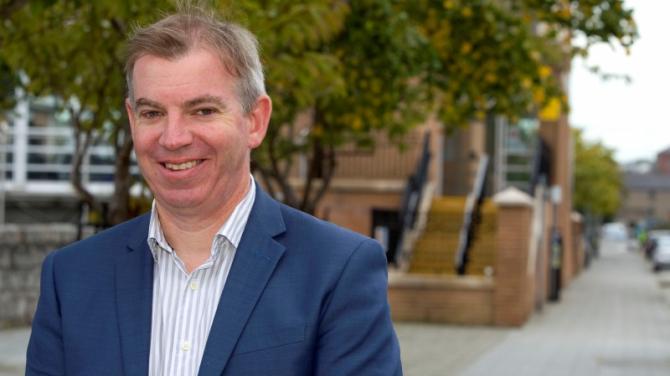 ELIMINATING the scourge of graffiti in the city centre is fundamental to making the area more attractive to tourists, says Newry BID Manager Eamonn Connolly.

In an interview with the Newry Democrat, Mr Connolly said that a multi-agency approach is key to getting rid of the “eyesore” of graffiti in public places and to reinvigorating Newry city centre.

In recent weeks the Democrat has received a number of complaints about the level of graffiti in the area and last week Newry BID took to the streets to have some of it removed.

“There's money being spent in the public realm, we have a shop-front grant scheme that's about to be rolled out now in Hill Street and graffiti doesn't help.”

Explaining the complex procedure and protocol in taking ownership of cleaning up graffiti on our streets, Eamon said that the involvement of various agencies is crucial.

“If you break it down to the fundamentals: [the] council is responsible for their own property and public buildings, the BID supports its members and will clean its members' private property of graffiti.

“There are therefore a range of other stakeholders, typically public sector – Department of Infrastructure, Department of Communities, Department of Agriculuture, Northern Ireland Water – who all have independent assets in town, and ultimately they would be responsible for their own assets.

“The challenge is how do we find solutions to deal with them and typically you've got to engage with the asset owners, even just for a consent basis, and ideally to provide a solution.”

Mr Connolly said that Newry BID have been proactive in tackling the problem and believes that mitigating the issue is intrinsic to making the city an attractive proposition to both tourist and prospective investors.

“You power wash it, you remove it and then you try and put anti-graffiti spray on it, but at the end of the day a hardened graffiti artist will always find a way or find a new location.

“We survey 3,000 people each month about what their perceptions of Newry are, why they come to Newry and what they'd like to see different about it, and we can see the real evidence about the importance of having welcoming, clean offering.

“It's fundamental about reinvestment in Newry that we make it a more welcoming place for people to come and stay longer in,” said Mr Connolly.

SDLP Councillor Gary Stoke believes that a “zero tolerance” approach is key to tackling the problem in the long term, and said: “It just looks so dirty and cheap, if we're supposed to be attracting tourists. It's one thing somebody actually doing an artistic mural or something that's attractive, but when someone just daubs something on the wall it just looks dirty, whereas if you have artistic talent put it to a positive use.

“It's a zero tolerance thing where if you get a bit of it somewhere, it is cleaned it up it's less likely to recur, whereas if someone starts daubing on something and thinks 'sure it's dirty anyway'.

“Certainly the council should be cleaning it. I know I've been involved in helping the council clean up any of their buildings.”

“Particularly if you've a private business and you've a shop-front with shutters and someone daubs something on them.

“It's hard enough to keep a business going in Newry, with rates and what not, without having graffiti to clean up as well.”