Claire stands up to cancer 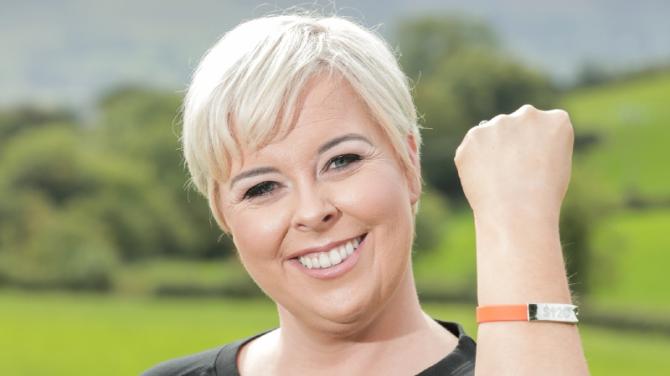 A BRAVE mum who charted her journey to beat cancer in a heart-felt blog and raised more than £35,000 to beat the disease is calling on people in Northern Ireland to Stand Up To Cancer.

Claire Rocks, 39, wrote moving posts and made funny fundraising videos as a way of helping her and her family cope with the difficult surgery and treatment that saved her life.

Today, just over a year on from the end of her treatment, she’s wearing the Stand Up To Cancer wristband to highlight the fact that one person in Northern Ireland – someone just like her – is diagnosed with cancer every hour.*

This stark statistic is driving the devoted mum to support Stand Up to Cancer, a joint fundraising campaign from Cancer Research UK and Channel 4 supported by a host of celebrities including Davina McCall, Edith Bowman, Alan Carr and Kirsty Allsopp.

Statistician Claire, of Burren, Co Down, knows from first-hand experience how important research is in the battle against cancer. By sharing her experience, she hopes to rally the nation to join the fight against the disease and help save more lives.

“Raising money for research is vital – it saves lives. It’s that simple. It’s why doing what you can for Stand Up To Cancer is so important.”

Claire was diagnosed with grade 3 invasive breast cancer in January 2017 after feeling a lump in her left breast just days before. She had a lumpectomy that same month, with immediate reconstructive surgery, and then underwent six rounds of chemotherapy, followed by radiotherapy.

Claire said: “I couldn’t take in the news when they told me I had cancer. As a statistician I work with figures for a living but it took me a while to digest it when the consultant said I had an 80 per cent chance of survival after 10 years. I thought he was telling me there was an 80 per cent chance I’d be dead in 10 years. That’s how scrambled my brain was at everything that was happening. The thought of telling my family was horrendous.”

Treatment was hard on Claire, especially her fourth round of chemotherapy which saw her become gravely ill with sepsis.

She’s slowly been building her strength since her last radiotherapy session last August and is feeling well enough to gear up for her return to work next month (October) at the Northern Ireland Statistics and Research Agency.

Like many women, Claire found that losing her hair was a difficult part of dealing with her diagnosis, but instead of dwelling on its gradual loss, she asked husband Mark to shave off her long blonde locks when they started to fall out.

Claire added: “I’d seen those clips in films when the cancer sufferer sobs in front of the mirror as their hair falls out. My hair had started to come out in my hands like that but I said to myself ‘I’m not going to be that woman’. So I got some drinks in, asked my mum to join us and we all sat in the kitchen as Mark shaved my head. It made it bearable.

“As time went on, I got more used to my wig – and then it actually started to take on a bit of a life of its own. First my daughter wanted to try it on, then I made Mark try it, and then all my friends and family. We started to take pictures, which we eventually made into a video we posted on YouTube, and before long it became a bit of a running joke. If you came to visit our house, you had to try on the wig.

“When you’re dealing with cancer, sometimes you feel if you don’t laugh, you’ll cry. This most definitely made us laugh.”

Claire will be monitored regularly now that her treatment has finished. She still adds to her blog, www.rockuptocancer.weebly.com, as a way of helping others, and her fund-raising mission continues. A recent event, ‘Rock Up To Cancer’ included a fun It’s A Knockout tournament and was a massive success. So far she’s raised an amazing £35,000 for cancer charities, including Cancer Research UK.

She added: “Whether you donate or organise your own bake sale or whatever, there are lots of ways to get involved. I really hope as many people as possible will get behind this campaign. Together, we can wipe the floor with cancer.

“I’m turning 40 in January and instead of dreading the milestone birthday like a lot of women, I’m ready to celebrate it. I’m so grateful my treatment was a success and I’m embracing all that life throws at me.”

People in Northern Ireland are being encouraged to take a stand now by requesting a free fundraising pack full of fun-filled ideas to help beat cancer sooner.

Stand Up To Cancer has raised £38 million since it was launched in the UK in 2012. The funding is used for clinical trials and projects which accelerate the development of new cancer treatments and tests, to help patients and ultimately save more lives.

This year, Stand Up To Cancer will culminate with a night of live TV on Channel 4, on Friday, October 26.