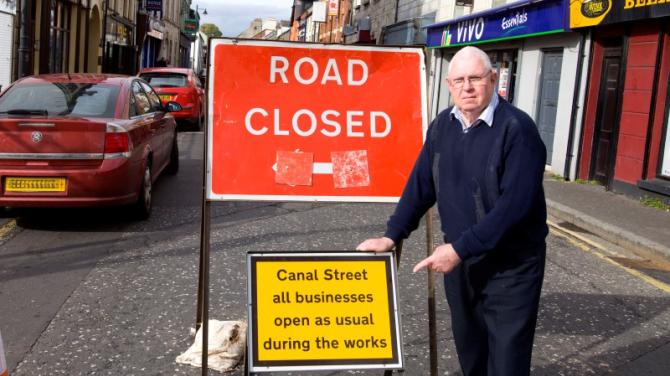 ROADWORKS at Canal Street have “brought Newry to a standstill” says Mr Bertie Flynn, the proprietor of Sinead's Children and Babywear shop on the street.

The works, to install storm water pipes, have been going on now for two weeks, and are scheduled to continue for another month.

But Mr Flynn said that although he, along with other residents and businesses on Canal Street were given notification of the works commencing by NI Water, there now seems to be uncertainty as to how long the work will actually take.

“All I can tell you is that they can't give you a straight answer,” insisted Mr Flynn.

“We don't know how long the place is going to be closed off and Newry has come to a standstill.

“It must be the most opened up street in the whole of Ireland – and there are over 11,000 vehicles uses it every day.”

Mr Flynn, who also lives on Canal Street, has been in business in the same location for 44 years and said that he, in common with other residents and business owners is “sick and tired” of the disruption.

“[There is] no compensation, no nothing and some of the public think everybody's on a ball of money, [because] this is happening – there's nothing,” he declared.

“And the worst thing of all is [the lack of] planning because people have deliveries to get and everything else and there was no planning for it.

“The residents and everybody are up in arms – people are just sick and tired, there are over 40 school buses [using the street], there are five schools in the area – buses are caught in traffic trying to get out of the quay, people are ringing us from the Warrenpoint Road saying that they can't move from there because of the traffic congestion.

“The traffic is coming out of Francis Street, Monaghan Street, Edward Street, all into the one lane.”