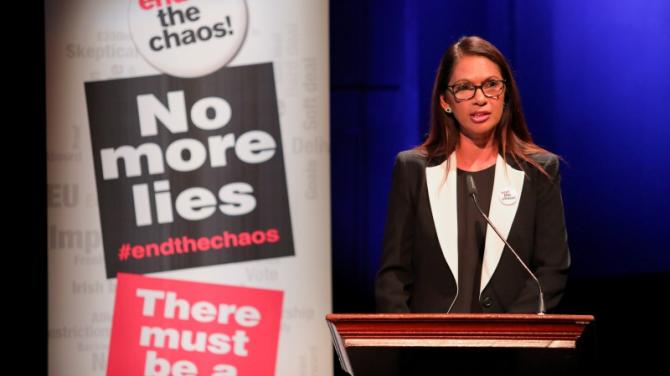 NEWRY can not be the “collateral damage” of Brexit, nor suffer economically in the same way it did after the partitioning of the island.

That's according to Dr Conor Patterson, CEO of Newry and Mourne Cooperative and Enterprise Agency, who spoke at a Brexit symposium alongside political campaigner Gina Miller and a number of other keynote speakers at the Sean Hollywood Arts Centre on Friday.

Speaking about the potential ramifications of Brexit, Dr Patterson believes it was foisted upon the Irish people against their wishes, before accusing the 'leave' campaign of being disingenuous with the facts in the lead up to the 2016 referendum.

“I didn't ask for this, it's a position we've been dumped into. We would like to get back to our day jobs,” he said.

“I met Boris Johnson in late-February 2016 during the referendum campaign with a colleague from the Newry business community.

“We left him in no doubt - and to be fair to him he gave us a hearing, we had half an hour with him – as what our concerns were with respect to what's now been described as the Irish border issue.

“So he knew the issue. We didn't hear about it during the campaign, but we've heard about it now.

“I'm concerned about the implications of this for politics here. It has pushed people into trenches.

“Look at Newry, and what Newry used to be - a place where the location of which was its greatest disadvantage for the 20th Century. Where a decision taken in Westminster had a huge negative impact on this area.

“We were the collateral damage of a decision taken then to partition the island of Ireland.

“But since the Good Friday Agreement over the last 20 years this place has been transformed because those barriers were dissolved.

“There's no better place to highlight the positive gains that came from the Good Friday Agreement,” said Dr Patterson.

Ms Miller - who famously took the Government to court over the legal standing of their ability to implement Brexit without the approval of Parliament - accused Prime Minister Theresa May of being clueless as to how to deal with the Irish border issue.

She said: “Now [it's] just 175 days until our 46-year-old partnership with the European Union is dissolved. There is no doubt that we have all enormously benefited from that partnership.

“Our ability, as UK citizens, to move freely around 28 member states, to cross borders frictionlessly, to trade with partners around the 27, including crucially, the trading of services that account for 80% of our economy.

“All of those quiet certainties that we have taken for granted are under grave threat as our relationship with the EU unravels.

“Alarmingly, with time running out, none of us know what will happen next. It is only too clear from the psychodrama that unfolded in Birmingham this week that Prime Minister doesn't have a clue either.”

At Friday's event, Ms Miller conveyed her concerns that Northern Ireland would be “cut-off” from the rest of the UK if the so-called 'backstop option' came to pass.

She added: “The backstop option may sound inoffensive, even safe, but it is not. It will leave Northern Ireland in a state of potentially never ending limbo, stuck in the EU single market but split off from the rest of the United Kingdom in terms of border management and revenue control.

“Or alternatively, it will lead to a hard border. In the event of a no-deal, be in no doubt that a hard border will be the consequence of leaving with no deal, a scenario in which the UK crashes out of Europe with no agreed deal and therefore no transitional period, a position confirmed by the Chancellor of Exchequer just a few days ago.”

Ms Miller believes that a hard border could result in the “unpalatable” return of the customs controls and defence barricades deployed at the height of the Troubles.

She said: “A return to border controls - barriers, fences - all the physical border infrastructure that disfigured the island of Ireland for decades, divided communities, disrupted trade and destroyed livelihoods must not happen - an unnecessary, unpalatable reminder of times past to everyone in this room.