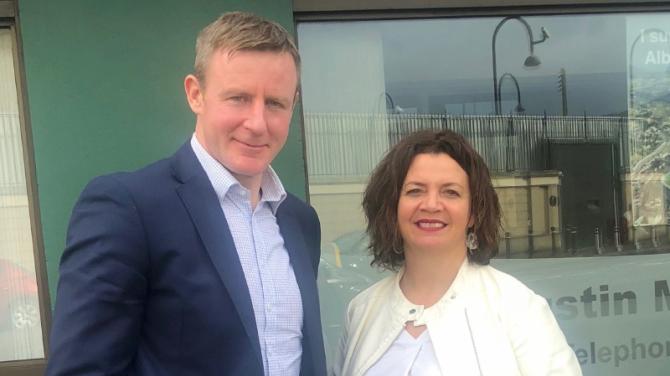 JUSTIN McNulty MLA has met with representatives of the Department of Infrastructure in Newry about concerns around parking enforcement by NCL parking attendants in Newry.

The SDLP Assembly Member for Newry and Armagh was accompanied by Sinead Forde of Art Bar Funkle and Eamonn Connolly, Newry BID Manager, to a meeting with Aidan O’Callaghan of the Parking Enforcement Unit and Ciaran McKenna the Senior Network Development Engineer, both from the Department of Infrastructure.

“In recent months I have been contacted by businesses operating in Monaghan Street who are exacerbated about what they perceive as a lack of discretion exhibited by NCL Parking Attendants,” said Mr McNulty.

“The big issue for them is if someone is a matter of minutes late returning to their car they are slapped with a £90 fine.

“Businesses are telling me it’s increasingly difficult to have deliveries carried out for they too are being targeted by those also known as the ‘Red Coats’.

“Business owners believe this is very discouraging for their customers and is driving trade from the city centre to the out-of-town retail parks. Those feeling the impact of that loss of business most are our small and independent retailers.”

Mr McNulty said the meeting was “frank, positive and productive”.

“Mr O’Callaghan and Mr McKenna were sympathetic to the concerns that they were tabled. However, they recognised that the needs of Newry have evolved from a parking perspective and also noted that provision of all day parking on some streets needs to be reviewed.”

The MLA concluded, saying that parking in Newry is a major issue which needs addressed and it’s not going away.

He said, “We have more people working, living and socialising in the city centre now with fantastic investment from multinational companies like First Derivatives and Stat Sports bringing even more jobs to the city.

“Parking is an issue that must be addressed with provision and practices evolved to meet the changing face of Newry.

“I will continue to engage with all involved and hope that positive progress can be made.”