Who could do this to a puppy? 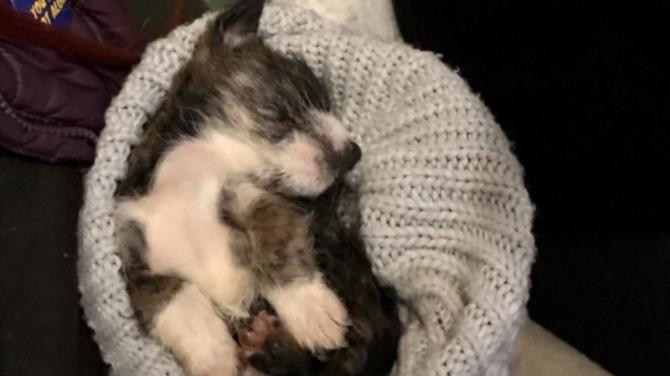 THE USPCA are offering a £500 reward for information that leads to a conviction following the death a three-week-old puppy.

The sick culprit put the defenceless animal in a sealed bag and discarded it in a ditch near Bessbrook.

It was heard whimpering by passers-by on Saturday evening and after its rescuers called the USPCA's emergency line, the puppy was taken to their headquarters where the charity's vet, Andrew Groves, did everything in his power to save its life.

Unfortunately, the Collie cross breed died in the early hours of Sunday morning.

The USPCA's David Wilson suspects that the puppy was dumped because it was the runt of the litter and was of no value to the heartless owner.

“Our vet came in and opened up because it was a pretty serious situation,” explained Mr Wilson. “The wee thing was far too young and just didn't make it I'm afraid.”

Mr Wilson said that, thankfully, puppies being dumped isn't too common in the area but the problem is that “we just don't know half the time”.

“That wee dog was whimpering, they heard it and done something about it but many a dog would just be drowned,” he added.

“We fished a dog out of the canal near Damolly not that long ago either.”

Admitting that the USPCA is not a wealthy charity, Mr Wilson said despite that, they needed to offer a £500 reward to help catch the individual who left this animal to die in the cruellest of circumstances.

“We don't often offer an award as we're not a wealthy charity but when something as serious, premeditated and vindictive as this happens, whoever did that deserves to be in front of a court,” he said.

“In these circumstances we felt that if we could do anything it would be contributing to getting this person convicted.”

If you have any information about the death of the puppy call the USPCA Animal Hospital on 02830 251 000.