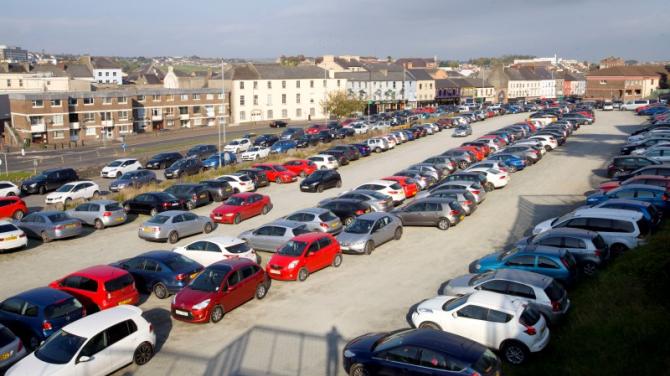 NEWRY BID are looking for a longer term solution to the irresponsible parking in North Street car park after they were forced to hire security.

The free car park is being used more than ever and has resulted in a number vehicles being blocked in because of drivers who insist on parking where they want.

The problem came to a head on Thursday (October 25) evening as at least 10 cars were blocked in due to irresponsible parking.

Newry BID placed a number of flyers on the vehicles of those they believed to be responsible warning them that their car will be towed.

To combat the issue car park security staff were hired on Friday morning to direct drivers and put traffic cones in place.

Newry BID manager Eamonn Connolly, said that the issue has taken up a lot of time and resources for the organisation.

“We just had to intervene and put some pro-active measures in place, vis-a-vie cones and security and unfortunately there's added cost with that,” he told The Newry Democrat.

“As a not-for-profit organisation providing a free service, those are challenges for us but equally we did our business engagement recently and parking has been flagged up as one of the most pre-eminent issues in Newry. We're happy to make the investment.

“The vast majority of people park respectfully but there are some people either through laziness or through cheekiness that have been abusing it.

“If we can cut that out it will be a win-win for everybody.”

Mr Connolly highlighted the 150 staff that have moved into First Derivatives' new Hill Street building as one of the main reasons why the car park has become so busy but stressed that it was a “good problem” and wished he had more problems like it.

Newry BID is now looking at a more cost-effective solution to working out the North Street car park problem but ruled out tarmacking and lining the area as it would cost around £750,000.

“We put in some temporary measures such as coning and security staff and we are now going to look and see if we can find some more medium term solutions to bring a bit of order,” he continued.

“What we're looking to do is come up with interim measures to provide a free service and provide it in an orderly and safe manner.”