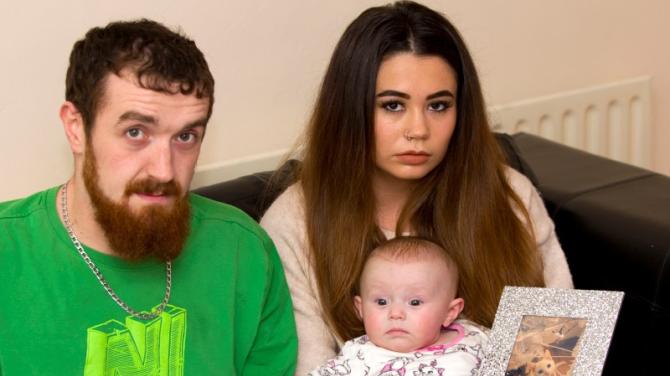 A HORRIFIC attack on a cat on Friday, October 19, in which the animal sustained a broken jaw and a fractured skull has left the beloved pet's owners “heartbroken”.

Ruth Anderson spoke to the Newry Democrat about her family's devastation at the callous attack on her cat, one-year-old Timmy, and of having to make the heart rendering decision to put the cherished pet to sleep after consulting with local vet Liam Fitzsimons.

“On Friday we got a knock on the door from our neighbours because he was our cat but the neighbours loved him as well, and he'd stay at their house as well as ours,” she said.

“Timmy had managed to get into their back yard and the neighbour originally thought that he had been knocked down and managed to find his way back. I just couldn't stop crying, we're devastated because he was like a baby to us.

“My partner, Gavan, ran into the back yard, grabbed him and we took him straight to the vet. He had blood coming from both eyes, one of his eyes was dislodged and underneath the skin, his face and his jaw was swollen and blood was coming from his mouth - it was devastating.”

After consulting with Mr Fitzsimons from the Newry Veterinary Centre, the family had to make the painful decision to put Timmy down on Monday morning after realising that he was going to have no quality of life.

“He was on pain relief and stuff like that but we had to put him to sleep. He kept deteriorating and deteriorating; he was blind and there was no life for him any more. It's disgusting, but there's three cats have gone missing in the area and there's three dogs have been poisoned as well on the Armagh Road.”

Ruth said that she can't fathom the cruelty displayed by whoever's responsible towards a defenceless animal.

“It's a disgrace, the vet said that someone has gone face on and struck him with an object. The vet said that if it was a car then his neck would have been broken. He said that it wasn't a dog because he'd have had puncture wounds.

“It's disgusted us, that's why we're so heart broke that someone could do this to him,” added an emotional Ruth.

Ruth, originally from Accrington, Lancashire, has lived in College Gardens with her partner Gavan for the past four years and said that Timmy had an infectious, playful nature that people naturally gravitated towards.

“There was not a bad bone in that cat's body at all. He's never bitten anybody or ever scratched anybody. It's just disgusting, and I don't want it to happen to anyone else at all.”

Vet Liam Fitzsimons, said he believed the injuries were caused be “trauma”. He discounted the possibility of Timmy's injuries being sustained by a vehicle.

“We initially thought that maybe it was a car, but a cat doesn't survive a car blow like that, the head would be flattened. It had a fractured skull and a fractured jaw,” he said.

“There should be very heavy sanctions because people very often walk away from animal cruelty and basically get a slap on the wrists. I know this is very dramatic, but a lot of these mass killers, they start off with animals and they progress on.”