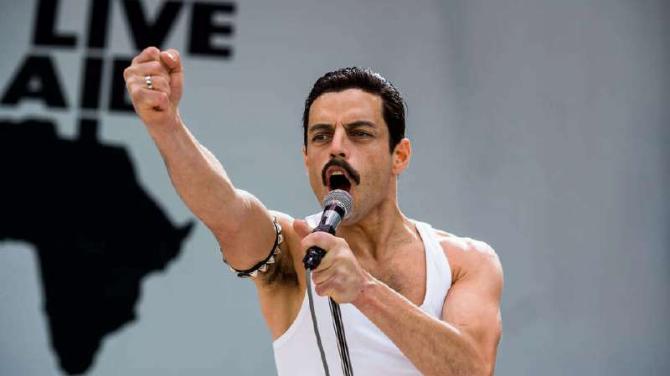 WHEN Queen released the album A Night at the Opera in 1975, the critical response to its leading single was decidedly mixed.

The experts in magazines and radio simply didn’t get it, dismissing the uncanny and avant-garde musical experiment as overlong and pretentious.

Their record label EMI had not wanted to release it, fearing commercial disaster.

That song, “Bohemian Rhapsody”, was the UK number one for 14 weeks altogether and is now considered one of the greatest rock songs of all time.

This biopic of Queen’s immortalised lead singer, which shares that song’s name, arguably reflects that anomaly.

It’s been a huge commercial hit yet has received a very mixed critical reception. Unlike the song however, reservations about the film are justifiable.

In 1970 Farrokh Bulsara (Rami Malek), a Heathrow baggage handler of Parsi heritage goes to see the band Smile play at a local nightclub after work.

The band’s lead guitarist is Brian May (Gwilym Lee) and its drummer is Roger Taylor (Ben Hardy).

After the show, when the band’s lead singer quits Bulsara impresses May and Taylor with his powerful vocal range.

After recording their debut album in exchange for a van, the eponymous “Queen” is picked up by EMI and Bulsara promptly changes his name to Freddie Mercury.

Though their initial album is successful and results in a US tour, EMI later refuses to release “Bohemian Rhapsody” as a single.

Queen sack their label and get Kenny Everett to play the single on Capital Radio and it promptly goes on to be a monster hit.

However with the song’s success (and the many, many hits that followed it), Freddie’s personal life starts to fracture.

His relationship with fiancée Mary Austin disintegrates and he begins an affair with his manipulative personal manager Paul Prenter.

Though there is some hope for a future relationship with prospective love interest Jim Hutton, tensions begin to arise within Queen.

Freddie’s bandmates are not happy with his out-of-control lifestyle and his desire to do two solo albums.

These problems coincide with a possible appearance at the upcoming 1985 Wembley Live Aid concert. Queen’s presence at the event will ultimately all depend on Freddie.

A long-gestating, troubled production, Bohemian Rhapsody is the very definition of the term “development hell”.

After a parade of high-profile actors (most notably Sacha Baron Cohen) dropped out, Malek was finally cast as Mercury, while Bryan Singer was chosen to direct.

Though Singer was sacked towards the end of principal photography and replaced by Dexter Fletcher, the former retain sole credit. The end result is indicative of a troubled process.

This slick film features a superb central performance, electrifying concert sequences but besides that, it is an often frustrating experience.

That is a bit of a shame, given the iconic status of the band. A predictably constructed, often blandly directed music biopic; its numerous historical inaccuracies will rile music historians and Queen fans alike.

The film’s portrayal of Mercury’s temporary split from the band is erroneous to say the least.

Mercury’s desire to do solo work didn’t really jepordise the band’s future, as the movie portrays.

Roger Taylor, after all, had already produced solo albums prior to this.

Perhaps most controversial is how the film represents Freddie’s AIDS diagnosis. He did not discover he was infected with the disease in 1985 (just prior to Live Aid) but rather in 1987.

This is an egregious factual distortion, one that almost throws the film off the rails.

What saves Bohemian Rhapsody from possible disaster is Malek, who delivers a performance of Oscar-worthy calibre.

As Mercury, he is utterly transformative, disappearing into a role that would swallow up lesser lights.

He is incredible in the concert scenes and in between those (as the film dips its toe into his personal life and the band’s recording sessions), he carries the film, ensuring it remains watchable even as convention and cliché stymie it.

Though it is about as revealing as and even more historically suspect than some other music biopics (I Saw the Light, The Karen Carpenter Story to name but two) Malek is just brilliant enough to ensure Mercury’s indomitable spirit is present and correct.

As a Freddie Mercury biopic, Bohemian Rhapsody is problematic. Malek however, is guaranteed to blow your mind.