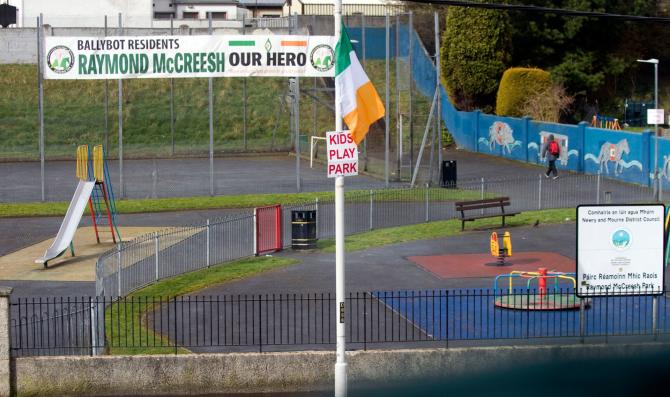 SINN Féin have lost in their attempt to stop Newry, Mourne and Down District Council selling off McCreesh Park through the use of the 'call-in' process.

In 2001 the playpark was controversially named after the IRA hunger striker, Raymond McCreesh.

Since then victims of the IRA and unionists have called for the name of the park to be changed.

Earlier this year it was recommended that the facilities in McCreesh Park and the nearby Barcroft playpark should be merged onto a single site.

Newry councillor Liz Kimmins proposed that a community consultation took place before a decision to sell the park was made at October's meeting of the council but this was voted against by the majority of councillors.

The Sinn Fein councillor confirmed a week later that her party would use the call-in, claiming the decision not to carry out a consultation was against the wishes of Barcroft and Ballybot residents.

On Monday evening the council published legal advice to councillors, which said there had been extensive consultation and analytical work in relation to the impact of any change in the provision of play facilities in this area.

According to UTV, the author of the report, Mr Tony McGleenan QC said that there had been detailed and repeated community consultation in respect of the future investment in Barcroft and McCreesh play parks and the need for rationalisation of this part of the Council’s estate.

Mr McGlennan said: "This decision [to sell the park] has been reached after community consultation and empirical analysis.

"It is difficult to see how this can properly amount to a disproportionate adverse impact."

He continued: "The decision to start the process does not equate to a commitment to dispose of the site. If no expressions of interest are made the issue will never arise.

"If expressions of interest are made the question of disposal will be returned to the Council before a final decision is made.

"In light of this I do not consider that the decision to enter the process can give rise to disproportionate impact on the Nationalist or Republican communities."

The Newry Democrat's website will have more on this story as it progresses.