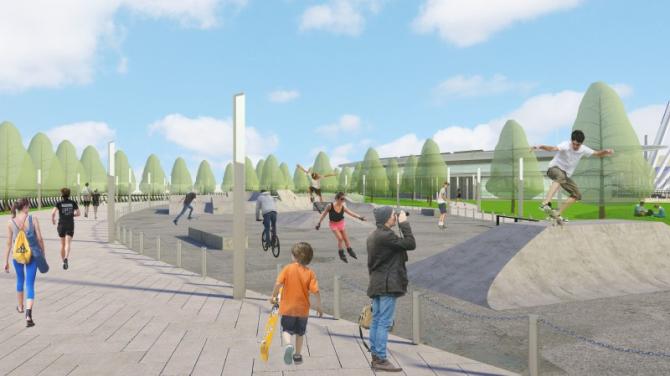 IT is hoped that a temporary pop-up park will be up and running at the Albert Basin site by Spring 2019.

During the Albert Basin Park Working Group meeting held earlier this month, the idea was discussed and members of Newry 2020 are now drafting proposals and funding applications, which should be submitted in the next few weeks.

Speaking to The Newry Democrat, Chair of Newry 2020 Brian Cleland explained that it has been agreed, in principal, with Newry, Mourne and Down District Council to go ahead with the pop-up park.

Ahead of the installation of the temporary park, the Albert Basin Park Working Group will run a number of workshops with community groups and local schools as part of their consultation.

It is also hoped that volunteers will come on board to help install the park.

“The aim would be to encourage use of the site, to make it more of a positive amenity, to improve the look of it and get people down there to get involved in the project,” said Mr Cleland.

“The details of that have yet to be worked out and that's why we want to go out to get consultation on some ideas of how best to do this but it's about making the site more useable for people and making it more attractive.”

Planners had advised the group that there should be a definite commitment in the form of a project team in order to progress with pre-planning application meetings and commissioning of reports.

It was also agreed that the full Albert Basin Park should be up and running within four years, something which Mr Cleland called an “ambitious goal”.

“It is quite an ambitious goal but the terms of reference for the working group says four years so we have a responsibility to deliver that within four years,” he continued.

“I personally think that is achievable if we keep focused and keep pushing ahead. That's our ambition.

“We're very excited and I feel like we're starting to build momentum and hopefully that will continue to build over the next few months.”

Also in November's Albert Basin Park Working Group meeting, a proposal to improve the entrance of the Albert Basin was agreed and it was also agreed that all those who have submitted expressions of interest should be invited to become members of the wider stakeholder forum in December.

Meanwhile, Michele Bryan gave an informative presentation about the Connswater Community Greenway in east Belfast and Andy Hall from the Big Lottery discussed funding opportunities and awards with the group.

The next Albert Basin Working Group meeting will take place on Thursday, December 6.