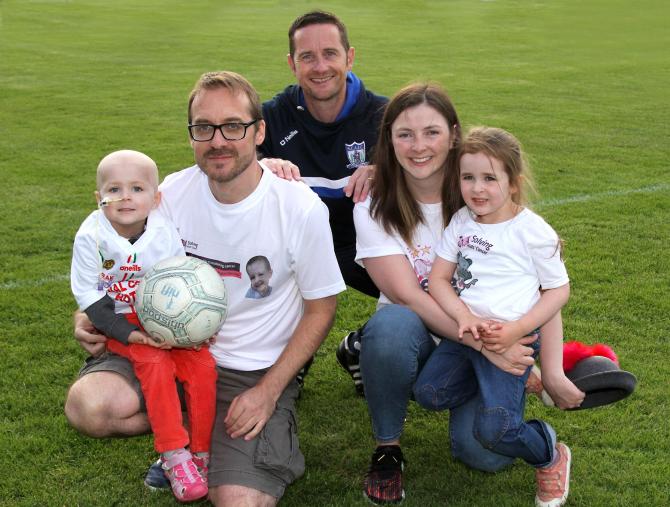 LITTLE Ellen Treanor's dad Paddy, has told The Democrat he is hopeful that the toddler will make the journey to America for pioneering neuroblastoma treatment “in May or June”.
Just before Christmas Ellen finished her second bout of immunotherapy treatment and she is scheduled to receive three more rounds of this treatment, before making the trip to New York for neuroblastoma injection treatment, which is aimed at attacking the cancerous cells in her body.
Thankfully, after her second round of immunotherapy in December, little Ellen was able to get home for Christmas just in time for Santa to visit!
“Antibody infusions last ten days and Ellen's the first girl to get this from they trialled it in Northern Ireland, she's the first girl to get it off the trial,” explained Paddy.
“They found out during the trial, they started off over three days and children couldn't handle the immense pain. They then took it over five days and they still couldn't do it. So they slowed it right down, so it's something like 1ml of that GD2 antibody every 50 minutes over 10 days.
“At the minute she's doing well, she's three more to get. One each at the end of January, February and March, so that'll be the end of her treatment with the NHS, all being well.”
Talking about the treatment in New York, Paddy said: “It's seven injections, and what it does, it teaches your body to fight the cancer cells.
“It mimics the cancer cells that lets on it's something else so that your own immune system attacks them and kills them if they do start to grow again.
“So that's seven injections over 12 months, you go there at the start for three weeks, you get two doses of injections in that three weeks, then you get medication to take in that three weeks. Every other month you go over for two to three days for the rest of the year.”
Paddy described fundraising by people on Ellen's behalf as “amazing” but said that despite closing in on their target, they hope top have contingency money in the bank in case a second round of treatment is needed.


Read the full interview in this week's Newry Democrat.