It was a demand for equality 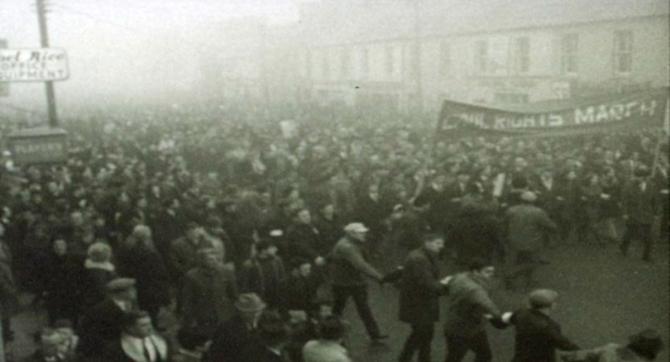 IMAGES of the Newry Civil Rights march were broadcast all over the world.

THIS Friday marks the 50th Anniversary of the People's Democracy march in Newry, in which political campaigners, activists and ordinary civilians demonstrated their solidarity with similar demonstrations against the injustice, inequality and prejudice that Catholics in The North experienced at the time.
A token march recreating the original route will take place this Sunday (January 13) to commemorate the anniversary.
1968/69 represented politically turbulent and tumultuous times in the world, a political paradigm shift that saw mass civil disobedience in Alabama, Prague, Paris, Jakarta, Vietnam and Northern Ireland.
The preceding 12 months saw the assassinations of both Dr. Martin Luther King and Robert Kennedey, killings that caused riots all over America, as palpable anger and political discord threatened to boil over and overthrow an establishment that many working class people seen as inherently rotten.
The People's Democracy movement in Northern Ireland had five key aims: one man, one vote, Freedom of Speech and Assembly, Repealing the Special Powers Act, an End to gerrymandering of electoral boundaries and a fair allocation of jobs and housing.
To mark the occasion, Newry Democrat journalist Martin McGuigan interviewed Rory McShane, Tom Keane, Joe McNulty and Tom Kelly, political commentators and some of the key players involved in organising the Newry march.
They each share their reflections and analysis of the movement, what it set out to achieve and what it's long-term legacy has been.

Read all of the opinion pieces in this week's Newry Democrat.