Little Alfie's journey of hope set for this April 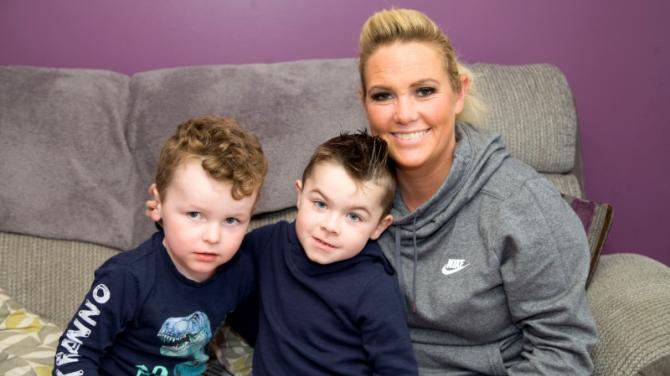 THE parents of little Alfie Pentony are hopeful that a life-changing experimental clinical trial in Florida will be brought forward to April.

Two years ago the six-year-old was diagnosed with Duchenne Muscular Dystrophy (DMD), a degenerative muscle wasting disease that has hampered Alfie's quality of life and left him unable to do most of the recreational physical activities that other little boys take for granted.

DMD is caused by a genetic mutation in the gene that produces a protein called dystrophin, and Alfie's parent's Colleen and Jamie hope that a pioneering gene-editing trial - where dystrophin is slowly injected into Alfie's body - will halt the degenerative aspect of DMD and encourage his body to start producing micro-dystrophin in the long-term so that Alfie can live a relatively normal life.

Speaking to The Democrat, Alfie's mum Colleen said: “Everything's on schedule and it's looking like he'll be called forward in April/May, because we thought it would be the end of May.”

The family intend to relocate to Florida for three months for the initial stage of Alfie's treatment whilst his body acclimatises to it, then they'll return every 30 days thereafter for two years for further dystrophin injections.

Before Alfie is admitted to the trial, however, he must undergo a series of tests to ensure that he's a suitable candidate for trial - something that causes the family great concern, explained Colleen.

“Once the bloods come back he has to go for MRI, biopsies and different stuff like that before he actually gets the treatment, then he has to hope that there's an antibody that he doesn't have in his body that will reject the injection.” she continued. “It's my biggest fear, I'm terrified of it.

“If there's an antibody in his body it could reject this injection that's going through him, so it's a case of fingers crossed for that.”

Explaining the injection process, which she and Jamie hope will enable Alfie to lead “a normal life” Colleen said: “It's a slow injection that's injected over a period of six to eight hours, after which he'll have to stay in intensive care for 72 hours.

“It [the injection] can't repair what muscular dystrophy has already done.

“Alfie uses his chair at the minute for long distances, he possibly will always need that - he'll never be able to run marathons or stuff like that - he hopefully will be able to lead a normal life.

“It will not repair what's already been done, but doctors are hoping that it will stop it in its tracks.

“They're hoping that he could lead a normal life because his body will start to produce a micro-dystrophin.”

Colleen said that the disease can, understandably, be frustrating for the six-year-old, who naturally wants to run, play football and mingle with friends like any normal child but, because of his physical limitations, he sadly can't.

Lauding the spirit of the wider Newry community, who have launched an array of fundraisers in an effort to reach the £100k needed for the cost of the clinical trial, Colleen said: “The way people have come round has been amazing that he now has this lifeline to go to America.

“There's Alfie's Climb, which Terence 'Banjo' Bannon has organised, and the Valentine's Gala Ball, which Cathy and Adrian Patterson from BHP Accountants have organised, and there's still a few tickets available or that.”

Colleen says that because of the progressive, degenerative nature of DMD, the medical trial is Alfie's only hope of leading a normal life: “It's hurting his legs at the minute,”she said. ”But it would eventually go to his arms, then you can't move and you see young children having machines to lift their food for them. What sort of life would that be for him?”

The mum said that Alfie has compiled a bucket list of things he wants to, or in some cases “really, really” wants to do.

“He wants to go on a camel, wants to visit a toy factory, then there's some things that he 'really, really' wants to do like wanting to meet Ed Sheeran.”